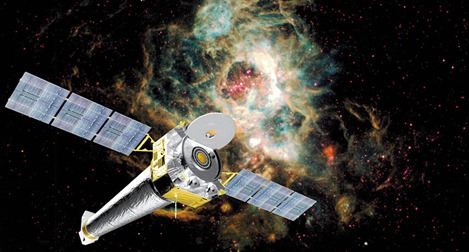 A strange X-ray signal has popped up again in new measurements, raising hopes that it could be a sign of dark matter.

Data from NASA’s Chandra X-ray Observatory reveal an excess of X-rays at a particular energy, creating a bump on a plot, scientists report online at arXiv.org on January 29. The X-ray “line,” as it is known, could reveal the presence of dark matter — an unknown substance that scientists believe constitutes most of the matter in the cosmos.

While the X-ray line has been found previously using several different telescopes, some searches have come up empty. The new observation strengthens the case that the odd feature is real, and eliminates some possible mundane explanations.

“This is a very exciting thing,” says astrophysicist Nico Cappelluti of Yale University, a coauthor of the report. “This is another measurement that sees the line in another direction.”

The new analysis uses data taken when the telescope was observing deep space, rather than pointing at a particular cluster of galaxies. So if the signal indicated dark matter, it would be due to particles in the region surrounding the Milky Way, known as its halo. When hypothetical dark matter particles called sterile neutrinos decay, they could produce X-rays at the energy of the line, about 3,500 electron volts.

Cappelluti and colleagues found that the relative intensity of the line in the halo and the line previously found at the center of the Milky Way was consistent with the expected variation in concentration of dark matter in various parts the galaxy.

Dark matter isn’t the only possible explanation — standard physics might also be able to explain the line. “There’s definitely a lot of debate,” says Shunsaku Horiuchi, an astroparticle physicist at Virginia Tech in Blacksburg who was not involved with the new work. The line “looks like it’s real, but then I don’t know if it’s dark matter or some atomic physics.”

Although there’s still a small chance that the result could be a statistical fluke, the analysis eliminates some other possible explanations. Scientists had proposed that the line could be the result of sulfur ions grabbing an electron from hydrogen atoms in space, but that process couldn’t explain the new data, Cappelluti and colleagues concluded. Likewise, a quirk of the telescope itself couldn’t explain the line, they determined.

“It’s kind of getting other people excited,” says Horiuchi.