Piecing together a big bang, one meteorite at a time 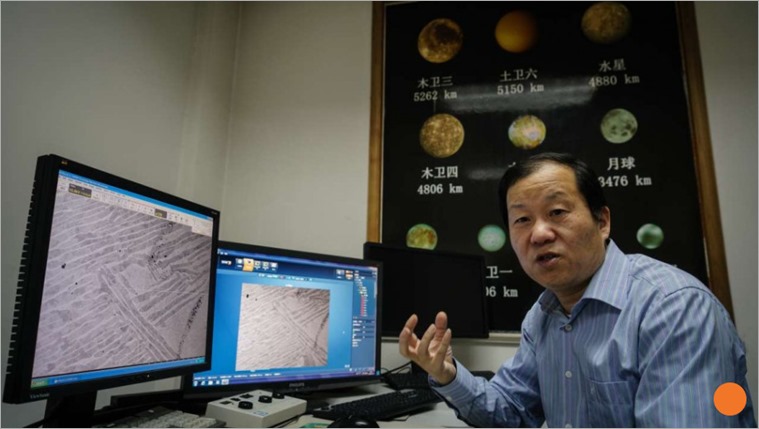 Xu Weibiao, a professor at the Purple Mountain Observatory, is helping to assemble an understanding of a massive asteroid that broke up above Earth thousands of years ago, raining down hunks weighing nearly 30 tonnes across Xinjiang

Several thousand years ago, a large asteroid disintegrated above Earth, raining down meteorites on Altay in the Xinjiang region. Fragments have been discovered more than 400km apart – making it possibly the longest meteorite-strewn field yet discovered. XU WEIBIAO, a research professor at the Purple Mountain Observatory in Nanjing, talks to STEPHEN CHEN about the Altay meteorite shower and other discoveries in his nearly four decades of research in China.

How does the Altay event compare with the Gibeon meteorite shower in Namibia, long regarded as the world’s largest?

The Gibeon field extended over an area up to 275km long, the Altay 425km. The international meteorite research community has already accepted our claim, with an official record in the global database for meteorites. A change should be made in textbooks that the biggest meteorite shower occurred in China, not Africa.

What is your evidence, and how did you measure the distance?

In 1898, some herdsmen discovered a large piece of shiny rock resembling the shape of a camel in the Gobi Desert in Qinghe county. They called it luotuoyin, or silver camel. Later it was named Armanty, the fourth largest meteorite in the world, weighing 28 tonnes.

In recent years, more meteorites were found in the same desert, including the Ulasitaidiscovered in 2004, the Wuxilike and Akebulake in 2011. The Akebulake meteorite weighs 18 tonnes.

These meteorites were scattered across a debris field pointing northwest with a distance between the furthest ends reaching more than 400km.

This evidence convinced us that the meteorites all came from the same mother asteroid, which created the biggest shower ever recorded.

A witness might first have spotted a bright star crossing over the sky. An explosion, happening at a relatively high altitude, would then have lit up the sky as bright as day. After the blast the asteroid split in two large pieces. One piece headed towards the Earth and disintegrated into the Ulasitai and Armanty fragments.

The other piece continued on its journey and experienced another explosion, very close to the Earth’s surface, which generated shock waves powerful enough to flatten trees and send animals flying in the air. This second explosion generated the debris that was later found in the north-western corner of the Altay desert.

The event was a wonder of nature that would have taken your breath away. But it was not recorded in any history books or recalled in local legends.

That left us bewildered, too, so we suspect the event might have happened 5,000 years ago or more, before people settled in the region.

People making the first discoveries reported a black, charcoal-like substance on the bottom of some of the meteorites. That could have been a sign of vegetation at the time of the impact. Researchers studying ancient climate believe the Altay region was covered in forest 5,000 years ago.

Unfortunately, none of the carbonic materials was saved for modern analysis. We plan to carry out excavations near the discovery sites. If we can find the remains of burnt plants we can determine the exact year of the impact.

plan to carry out excavations near the discovery sites. If we can find the remains of burnt plants we can determine the exact year of the impact.

Have you estimated the size of the asteroid?

No, even a wild guess cannot be made at this stage because the calculation is affected by many uncertainties, such as the angle and speed of the impact. If we have more samples we may derive more data to help with the estimation. But we believe the asteroid must be huge, otherwise it could not have affected such a large area.

You have been studying meteorites since the 1980s. What led you into this field of research?

My original interest was in physics, but at university I was assigned to the Earth chemistry department.

I was disappointed at first. Soon there was a chance to examine a fresh meteorite and I was hooked from then on because it contained many secrets about the universe.

Most meteorites are old, some formed during the infancy of our solar system. They could provide us with information about many important questions, such as the formation of the planets and the start of life on Earth.

Do you have difficulty in obtaining funding for your work on fundamental science problems due to the lack of any immediate applications?

China’s investment in fundamental research has increased significantly in recent years. We have sufficient funding to buy cutting-edge equipment, carry out long field trips or buy samples. Many Chinese researchers studying asteroids abroad have returned because now they are able to continue with the same research at home.

Not long ago a research team discovered the possible remains of coal in an asteroid from Mars. Although the conclusion may need further evidence to back it up, their discovery sheds new light on life on Mars. The number of scientists studying meteorites in China is small, but the quality of work is high.

Has your research been affected by the popularity of meteorite collecting in China, which has seen people pay prices for meteorites that are several hundred times higher than the price of gold?

The growth in asteroid collecting in China actually helps scientists. There are about 50,000 known meteorite pieces around the world. In the past, meteorites found in China were usually sold to buyers abroad. But in recent years, because domestic buyers are offering higher prices, the trend has reversed. More and more meteorites offered on the international market are actually coming into China.

When a private collector obtains a new meteorite, they will often approach us to carry out some analysis and, in exchange, they sometimes gave us samples weighing a few grams for free.