A Natural Law for Rotating Galaxies… What Does This Mean for Dark Matter? 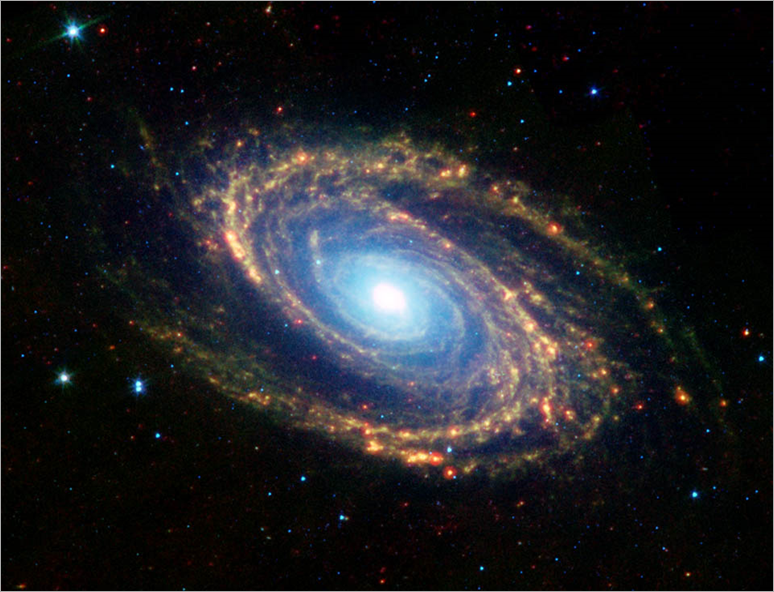 An image of the nearby galaxy Messier 81, created with data from NASA's Spitzer Space Telescope.

Distant galaxies, black holes, exotics worlds…these are not just the stuff of science fiction; they are also the stuff that makes up our reality. Our quest to understand the universe is thrilling, challenging, and often confusing. Even the basic question “What is the universe made of?” isn’t easy to answer.

Adding new pieces to this puzzle, researchers from Case Western Reserve University and the University of Oregon recently discovered a natural law for rotating galaxies. Their surprising result is the subject of a new paper coming out later this week in Physical Review Letters that could have serious implications for the theory of dark matter.

The planets in our solar system rotate around the sun because of gravity. In the early 1600s, astronomer Johannes Kepler worked out a mathematical relationship between a planet’s distance from the sun and its orbital period, the time it takes to go completely around the sun. This is known as Kepler’s third law of planetary motion, and it reveals that planets farther from the sun travel around it with slower speeds. Isaac Newton later generalized Kepler’s law for all orbital systems.

There’s a problem though. The law doesn’t appear to hold for stars orbiting the centre of their galaxy. Astronomer Vera Rubin highlighted this discrepancy in the 1970s and since then, astronomers have verified time and again that stars on the outskirts of a galaxy rotate around the centre at the same speed as stars closer the centre. This result gave rise to the idea that galaxies have a halo of dark matter. If this is the case, stars do follow Newton’s law once the missing mass, made up of dark matter, is accounted for.

In this new research, work by astronomers Stacy McGaugh and Federico Lelli (Case Western) and Jim Schombert (Oregon) reveals that galaxies obey a natural law just like planets. It’s just not the same one.

The missing mass problem is the result of a difference in how we expect stars within a galaxy to behave and the way that they actually behave. Instead of assuming that these two should match, McGaugh, Lelli, and Schombert compared the observed orbital speed of stars within a galaxy (described by their radial velocity) to the predicted value that assumes what you see is what you get—no dark matter. Then they looked at the relationship between these results for a large number of galaxies.

Their work relied on data from NASA’s Spitzer Space Telescope, a space-based observatory that studies objects in infrared light. Over the years Spitzer has observed many types of galaxies, collecting information on how gas and stars are distributed within them. This information can be used to estimate the visible mass of a galaxy, which can be used to predict the radial velocity of its stars. Using 2,693 data points from 153 very different galaxies, the researchers modelled the radial velocity based on the visible mass of each galaxy.

Next, the scientists graphed these results against observed, published results of radial velocity for the same galaxies. When they got to that point, says McGaugh, “There was the result on the screen: Far better than we had ever hoped. It just fell right out.” There was a clear mathematical relationship between the observed radial velocity of a star in a galaxy to the distribution of visible matter.

If dark matter ultimately dominates the mass of galaxies, as many scientists think, then there’s no reason to assume that the amount of visible matter should be directly related to the amount of dark matter. But that’s just what this work implies. If two galaxies with very different properties have the same distribution of visible mass, the observed radial acceleration is the same. If you know one, you know the other. Not only is this surprising, it’s a big deal.

The authors suggest that their result can be explained in three ways.

1.It represents the end product of galaxy formation.
2.It represents new "dark sector" physics.
3.It is the result of new dynamical laws rather than dark matter.

None of these explanations are completely satisfying, say the authors. Their paper doesn’t go into the details, but it falls right in the middle of an ongoing discussion about the validity of the dark matter model. This work demonstrates a regularity in the data, says McGaugh. “How you interpret that is a whole 'nother can o' worms.” There’s no doubt that scientists will be elbow deep in that can before long.