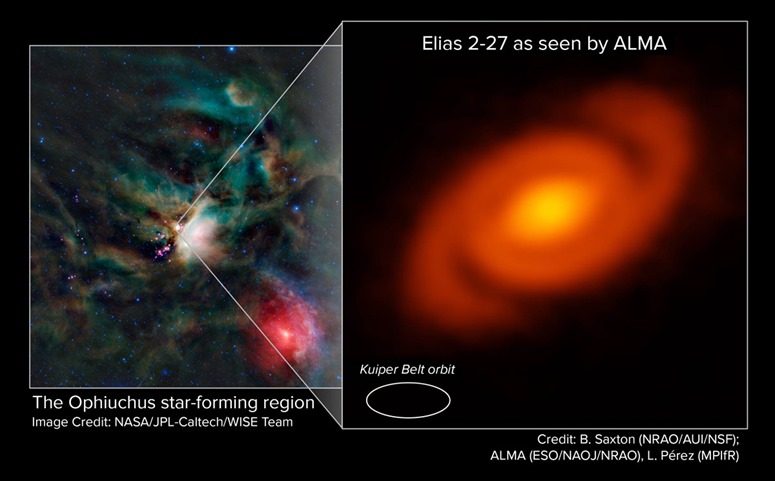 Astronomers thought it likely they would find a spiral of particles hidden in the cloudy disks that orbit and feed new-born stars. They have now found one, even though they weren’t looking for it.

A project initiated by Rice University astronomer Andrea Isella years ago bore fruit with the first observation of a pair of symmetrical spiral density waves around a protostar, one still gathering mass from its gaseous cloud.

The report in Science co-authored by Isella and led by his former California Institute of Technology colleague, Laura Pérez of the Max Planck Institute for Radio Astronomy, details the discovery around Elias 2-27 that could help explain why and how planetary systems form. Elias 2-27 is in a nebula within the Southern constellation Ophiuchus, about 450 light years from Earth, and was already known to host an unusually massive disk.

Astronomers have seen spirals on the surface of protoplanetary disks, but this is the first time they have detected a spiral density wave in a disk’s midplane, where planets are expected to form. They believe disks around these Protostars, which both feed the star and send material into the far reaches, are susceptible to gravitational instability caused by the large amount of gas and dust orbiting the star.

This instability prompts the material to coalesce into spiral-like arms in the flow of material around the star. Over time, they believe the material in these dense arms become the seeds of planetary systems. Gravitational instability not only suggests how spiral arms might form, but also how planets begin to take shape far from the warmth of their sun.

“We don’t completely understand how planets form,” said Isella, an assistant professor of physics and astronomy, “but we suspect there are two ways: Either small particles stick together until they form something like the Earth or Mars, or accreting gas forms a planet like Saturn or Jupiter. 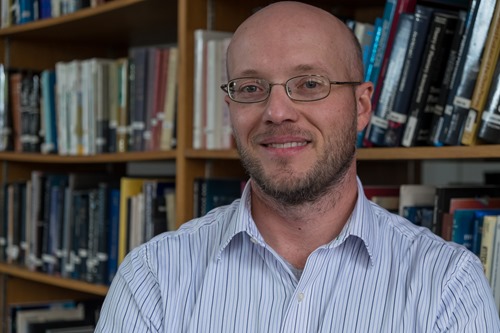 “But this process works only very close to the star, within a few astronomical units (roughly the distance from the sun to the Earth), because that’s where all the material is, and it has to have enough density.”

Planets forming farther out, at 20-30 astronomical units, need material too, but the core accretion process is less likely, the researchers noted. “If a disk is massive enough to be gravitationally unstable, a spiral will form naturally,” Isella said. Material spiralling into the cold depths may collapse under its own gravity and form the seed of a new planet.

Large exoplanets have been observed far from their host stars, but how they got there has been a mystery, he said. “If we can measure the mass of the disk and say, well, there is a lot of material, and we see this feature, it’s a direct demonstration that this process might work,” Isella said.

He said the greater resolution provided by the world’s newest and largest radio telescope, the Atacama Large Millimeter/submillimetre Array (ALMA) in the high desert of Chile, made the discovery possible. For the first time, astronomers were able to see through a disk-shaped cloud of dust and gas around the protostar to the denser mid-disk region.

Based on their initial work on disks in 2010 and 2013, Perez proposed a close-up of Elias 2-27 in 2013, about the time ALMA came online. “As often happens, you find things you don’t expect to see. This spiralling feature was completely unexpected,” Isella said.

“When the project started, we wanted to see how the dust grain in these disks evolve with time,” Isella said. “Planets start to form from micro-sized particles that stick together, and Laura and I thought we might be able to measure the size of the dust particles based on their distance from the star.

“If you look at two or three different wavelengths of light from the disk, then you can measure grain sizes as a function of radius,” he said. “But when we got the data, we got this beautiful spiral.”

Collaborators in the U.S., Germany, Chile, the Netherlands, Italy, South Korea and the United Kingdom contributed to the paper, and many will be part of the next effort at ALMA to gather information from 20 known Protostars with similar properties.