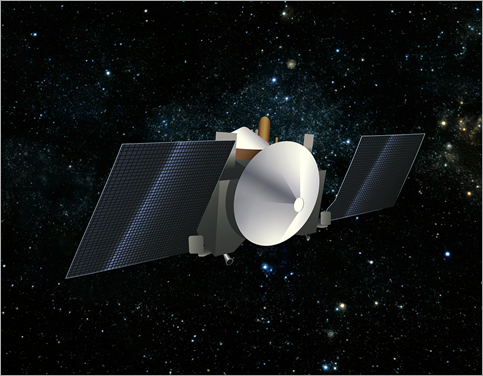 NASA’s OSIRIS-REx spacecraft fired its Trajectory Correction Manoeuvre (TCM) thrusters for the first time Friday in order to slightly adjust its trajectory on the outbound journey from Earth to the asteroid Bennu. The spacecraft’s planned first Trajectory Correction Manoeuvre (TCM-1) began at 1 p.m. EDT and lasted for approximately 12 seconds. The manoeuvre changed the velocity of the spacecraft by 1.1 mile per hour (50 centimetres per second) and used approximately 18 ounces (.5 kilogram) of fuel.  The spacecraft is currently about 9 million miles (14.5 million kilometres) from Earth.

TCM-1 was originally included in the spacecraft’s flight plan to fine-tune its trajectory if needed after the mission’s Sept. 8 launch. The ULA Atlas V’s launch performance was so accurate, however, that the spacecraft’s orbit had no practical need for correction. Instead, the OSIRIS-REx mission team used the Oct. 7 manoeuvre to test the TCM thrusters and as practice to prepare for a much larger propulsive manoeuvre scheduled in December.

The mission had allocated approximately 388 ounces (11 kilograms) of propellant for TCM-1 to create a velocity change of up to 26 miles per hour (11.6 meters per second), had it been necessary. The unused propellant from this event provides more fuel margin for the spacecraft’s asteroid proximity operations once OSIRIS-REx arrives at Bennu.

The OSIRIS-REx spacecraft has four different kinds of thrusters providing considerable redundancy in its ability to manoeuvre on its way to the surface of Bennu and back. OSIRIS-REx began using its Attitude Control System (ACS) thrusters shortly after launch to keep the spacecraft oriented, so that its solar arrays point toward the sun and its communication antennas point toward Earth. Today was the first use of its larger Trajectory Correction Manoeuvre (TCM) thrusters. In December OSIRIS-REx will use its largest thrusters, the Main Engine (ME) thrusters, to target the spacecraft for its Earth Gravity Assist scheduled for Sept. 22, 2017. Its smallest thrusters, the Low Thrust Reaction Engine Assembly (LTR) thrusters, will be used for the delicate manoeuvres close to the surface of the asteroid Bennu.

NASA’s Goddard Space Flight Center provides overall mission management, systems engineering and the safety and mission assurance for OSIRIS-REx. Dante Lauretta of the University of Arizona, Tucson, is the principal investigator, and the University of Arizona also leads the science team and the mission’s observation planning and processing. Lockheed Martin Space Systems in Denver built the spacecraft and is providing spacecraft flight operations. Goddard and KinetX Aerospace are responsible for navigating the OSIRIS-REx spacecraft. OSIRIS-REx is the third mission in NASA’s New Frontiers Program. NASA’s Marshall Space Flight Center in Huntsville, Alabama, manages the agency’s New Frontiers Program for its Science Mission Directorate in Washington.