Antimatter and the Sail to propel spacecraft to our nearest star 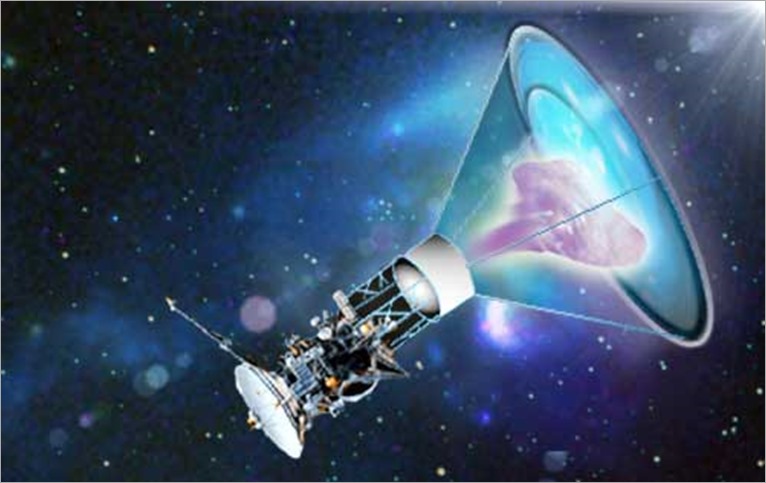 An antimatter probe to a nearby star? The idea holds enormous appeal, given the colossal energies obtained when normal matter annihilates in contact with its antimatter equivalent. But as we’ve seen through the years on Centauri Dreams, such energies are all but impossible to engineer. Antimatter production is infinitesimal, the by-product of accelerators designed with a much different agenda. Moreover, antimatter storage is hellishly difficult, so that maintaining large quantities in a stable condition requires multiple breakthroughs.

All of which is why I became interested in the work Gerald Jackson and Steve Howe were doing at Hbar Technologies. Howe, in fact, became a key source when I put together the original book from which this site grew. This was back in 2002-2003, and I was captivated with the idea of what could be called an ‘antimatter sail.’ The idea, now part of a new Kickstarter campaign being launched by Jackson and Howe, is to work with mere milligrams of antimatter, allowing antiprotons to be released from the spacecraft into a uranium-enriched, five-meter sail.

Reacting with the uranium, the antimatter produces fission fragments that create what could be considered a nuclear-stimulated ablation blowing off the carbon-fiber sail. As to the reaction itself, Jackson and Howe would use a sheet of depleted uranium U-238 with a carbon coating on its back side. Here’s how the result is described in the Kickstarter material now online:

When antiprotons… drift onto the front surface, their negative electrical charge allows them to act like an orbiting electron, but with different quantum numbers that allow the antiprotons to cascade down into the ground orbital state. At this point it annihilates with a proton or neutron in the nucleus. This annihilation event causes the depleted uranium nucleus to fission with a probability approaching 100%, most of the time yielding two back-to-back fission daughters.

Now we get into a serious kick for the spacecraft:

A fission daughter travelling away from the sail at a kinetic energy of 1 MeV/amu has a speed of approximately 13,800 km/sec, or 4.6% of the speed of light. The other fission daughter is absorbed by the sail, depositing its momentum into the sail and causing the sail (and the rest of the ship) to accelerate.

The concept relies, as Jackson said in a recent email, on using antimatter as a spark plug rather than as a fuel, converting the energy from proton-antiproton annihilations into propulsion. 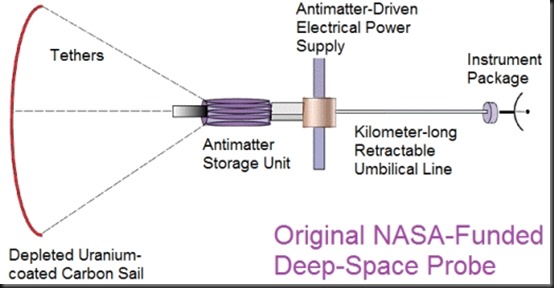 The current work grows out of a 2002 grant from NASA’s Institute for Advanced Concepts but the plan is to develop the idea far beyond the Kuiper Belt mission Jackson and Howe initially envisioned. Going interstellar would take not milligrams but tens of grams of antimatter, far beyond today’s infinitesimal production levels. In fact, while the Fermi National Accelerator laboratory has been able to produce no more than 2 nanograms of antimatter per year, even that is high compared to CERN’s output (the only current source), which is 100 times smaller.

Even so, interest in antimatter remains high because of its specific energy — two orders of magnitude larger than fusion and ten orders of magnitude larger than chemical reactions — making further research highly desirable. If the fission reaction the antimatter produces within the sail is viable, we will be able to demonstrate a way to harness those energies, with implications for deep space exploration and the possibility of interstellar journeys.

The original NIAC work led to a sail 5-meters in diameter, with a 15-micron thick carbon layer and a uranium coating 293 microns thick. Interestingly, the study showed that the sail had sufficient area to remove any need for active cooling of the surface. Indeed, the steady-state temperature of the sail would be 570 Celsius, below the melting point of uranium.

The work was based around a 10 kg instrument payload to be delivered to 250 AU within 10 years. Turning to interstellar possibilities, Breakthrough Star shot has been talking about reaching 20 percent of light speed with a beamed laser array pushing small sails. Jackson and Howe now seek roughly 5 percent of c, making for a mission of less than a century to reach Proxima Centauri, where we already know an interesting planet awaits.

But here’s a significant difference: Unlike Breakthrough Star shot's flyby assumptions, the antimatter sail mission concept is built around decelerating and attaining orbit around the target star. In the absence of magsail braking against Proxima’s stellar wind, this would presumably also involve antimatter, braking with the same methods to allow for long-term scientific investigation, thus avoiding the observational challenges of a probe pushing past a small and probably tidally-locked planet at 20 percent of light speed.

Here’s how Jackson describes deceleration in his recent email:

The discovery of Proxima b, that interesting planet evidently in the habitable zone around the nearest star, continues to energize the interstellar community. The Kickstarter campaign, just underway and with a goal of $200,000, hopes to upgrade earlier antimatter sail ideas into the interstellar realm. Tomorrow I want to say a few more things about the antimatter sail and the issues the Kickstarter campaign will address as it expands the original work.