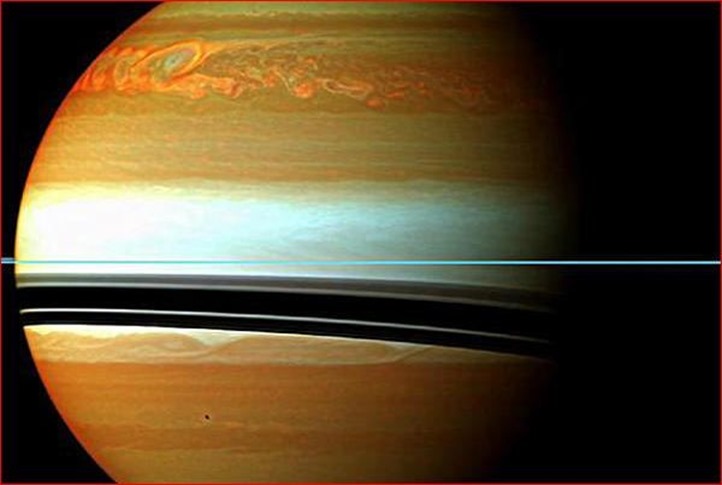 The Cassini probe, investigating Saturn, has detected a strange swirling structure, hexagonal in shape, at the north pole of the planet. The structure appears to regularly change colour.

Saturn is the sixth planet from the Sun and the second-largest in the solar system, after Jupiter. Saturn is a gas giant and its radius is some nine times that of Earth. The most striking feature of Saturn is its nine continuous main rings and three discontinuous arcs. However, it is a different, somewhat mysterious feature that has attracted recent interest from astrophysicists.

Cassini’s investigations into the Saturnian region (Saturn and its moons) have focused in on a 20,000-mile hexagonal-shaped formation. The regular changing of colours is possible linked to changing the seasons (with colours alternating between blues and yellows.) Four Earth years are sufficient to see some colour change, although the full cycle could take the time period to move through all of the Saturn’s seasons, which are equal to 29 Earth years. The region of interest is possibly of a similar nature to Jupiter’s famous red spot.

NASA scientists think the colour change is connected to the production of photochemical hazes in the atmosphere, coinciding with the Saturnian summer solstice (that is, the influence of shifting patterns of solar heating.) Here it is reasoned that as sunlight reaches the planet, the heat produced generates aerosols. Sufficed volume of gas then leads to a colour changes in the atmosphere within the region of the hexagon.

It is thought the hexagon is some form of six-sided jet stream that rotates at a similar velocity to the planet. The rate of air blasted upwards is thought to be over 200 miles per hour. The hexagon is made of a band of upper-atmospheric winds which creates its shape.

The cause of the structure could be some form of permanent weather feature, such as a hurricane like wind. The pattern of the wind is most probably influenced by solar activity. This means the sun generates the aerosols, affects their colour, and accounts for the atmospheric activity.

Aside from the range structure, Saturn’s cloud formation is also attracting interest. Saturn's clouds are shaped by a branch of physics called fluid dynamics. This describes the motion of gases and liquids.