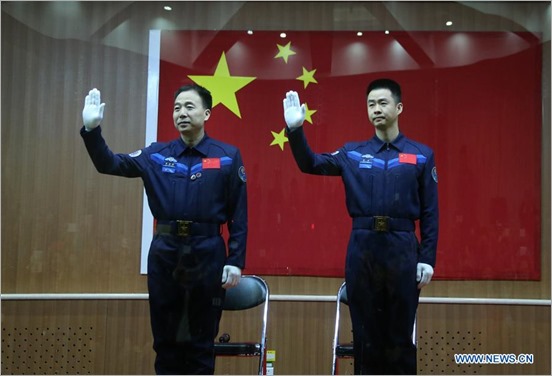 China will launch its sixth manned space mission Shenzhou-11 today, officials with the space programme said, taking the country closer to its ambition of setting up a permanently manned space station by 2022.

After the 7.30am launch in the remote north-western province of Gansu, the mission's two astronauts will dock in two days with the orbiting space lab Tiangong-2 which was launched last month. They'll spend 33 days on the country's new space lab conducting experiments in physics, medicine and biology.

Thirty-three days probably doesn't seem like much — one Russian cosmonaut spent 438 days up there — but it's actually part of some major plans that China has for its space program.

It will be Mr Jing Haipeng's third flight into space following missions in 2008 and 2012. The former fighter jet pilot will also be celebrating his 50th birthday in space.

"Being an astronaut is my career. Space exploration is my job as well as my pursuit. It is challenging, risky, even dangerous. But honestly, this is what I love, this is what I enjoy," said Mr Jing, adding that China has improved its ability to deal with emergencies, first aid and space experiments.

Mr Jing is joined by 38-year-old Chen Dong. With a safe flight record of 1,500 hours as an air force pilot, Mr Chen was selected to join China's second batch of astronauts in May 2010 and was picked for the Shenzhou-11 mission in June. This will be his first space flight.

"This mission is characterised by its longer duration and more tests," Mr Chen told reporters in a televised news conference.

"I am looking forward to viewing Earth and our motherland from space," said Mr Chen, adding that he hoped to be able to take many photos and enjoy the celestial scenery.”