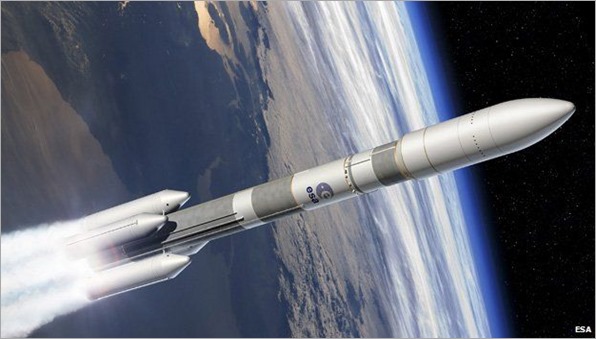 EU officials said today they planned to invest 12 billion euros by 2020 to develop new rockets to launch satellites for defence and data-driven businesses and reduce reliance on Russian launchers.

With limited options to launch orbiters and Russia controlling a large share of the market, businesses currently wait years for a window to put satellites in space.

The European Commission wants to help Europe's top rocket contractor, Airbus Safran Launchers, to develop the Ariane 6 rocket by 2020 to better compete with U.S. and Russian rivals on cost and payload size.

"We don't want to use the other launchers. We are now using the Soyuz because there is no other way," Europe's Industry Commissioner Elzbieta Bienkowska told reporters.

With the global space industry growing faster than any other sector, the EU unveiled its strategy on Wednesday to ensure it does not fall behind in sectors, including defence, that use earth-observation data.

"We know who are the biggest global space powers: It is the U.S., it is Russia and China and India are coming so we want to be second or third," Bienkowska said.

The Commission plans to promote the use of its own global satellite navigation system Galileo in mobile phones and make the data available for business.

Europe will launch more than 30 satellites over the next decade to complete Galileo, which will work in tandem with the U.S. GPS system, EU officials said.

"Galileo data will be much more precise than GPS," Bienkowska said.

Russia and China have launched their own global positioning systems to underpin their defence industries and civilian commerce.

Europe is the world's third largest satellite manufacturer and the 28-nation bloc hopes investment in the space sector can increase the number of related jobs from the current 230,000.

"The benefit for the economy from one euro invested in space is seven euros back," Bienkowska said. (Editing by Andrew Roche)