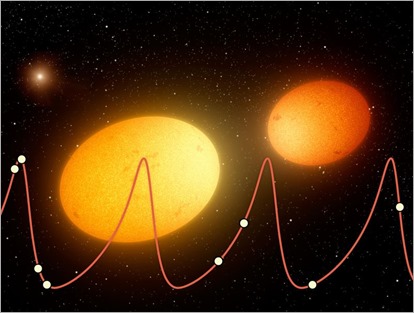 The binary stars are two huge stars that orbit around each other. Certain binary stars are called heartbeat stars because if the brightness of the two stars is mapped over time they would resemble an electrocardiogram, a graph that portrays the activity of human heart.

The stars could get as close as few stellar radii to each other and sometimes 10 times farther from one another during the course of an orbit. When the stars get too close due to the gravitational pull exhibited by each other, they tend to become ellipsoidal in shape. The change in shape also affects their brightness; hence the resultant light effects vary from time to time.

This is similar to the "tidal force" that causes waves on Earth. The discovery of heartbeat stars is significant since they help scientists to get better understanding of tidal force and how it works on other astronomical objects as well.

It is also noted in the NASA's Jet Propulsion Laboratory report that the tidal forces causes the heartbeat stars to ring or vibrate when they are close to each other. This is caused as a result of fluctuations in the diameter of the stars due to gravitational pull while in close proximity.

"You can think about the stars as bells, and once every orbital revolution, when the stars reach their closest approach, it's as if they hit each other with a hammer," said Avi Shporer, the lead author of the study and NASA Sagan postdoctoral fellow at NASA's Jet Propulsion Laboratory, Pasadena, California, in press release.

Shporer noted that one or both the heartbeat stars vibrate as they revolve around the orbit; however, when they get close to each other they behave as if they are "ringing very loudly."

Kepler, which is currently on its K2 mission, has discovered several heartbeat stars in years. A star named KOI-54 that appears brighter every 41.8 days was spotted by Kepler and a report on KOI-54 was published in a study in 2011. Yet again in 2012 after Kepler discovered 17 new astronomical objects the term "heartbeat stars" came into existence.

The study on heartbeat stars is published in The Astrophysical Journal.