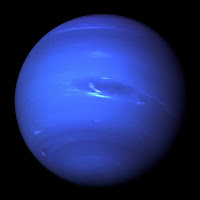 Neptune is the 8th planet in order of distance from the Sun. At the present time it is a morning object rising at about 1 am (UT), and can be found in the constellation of Aquarius close to Lambda Aqurii at RA 22h 55m 02s DEC -7˚ 49’ 14”. The planet comes to opposition on 2 September when it is best placed for observation.
The planet lies close to the Ecliptic, the celestial path of the Sun through the zodiacal constellations, which the Moon also follows on its nightly journey. There are special occasions when Neptune, the Moon and Earth line up, and the Moon is then seen to pass over and hide the planet Neptune, a spectacle called an occultation.
During 2016 this happens on 7 occasions. While each occultation is only visible from small regions of the Earth’s surface, it means that many of you will have an opportunity to witness this wonderful event, the first of which will take place soon after midnight on 26 June. It is visible from central and northern Europe, and western Russia.
This is a wonderful photo-opportunity. For ‘Star party’ organisers I have listed the time & visibility for all the occultation's of Neptune below. Here is a short video I made showing the first Occultation of Neptune in June. Please share it with your members ...


At magnitude + 7.9 Neptune is faint, yet it is visible in a pair of 10x50 binoculars and it looks like a star with a distinct bluish tint, so the occultation events this year can be viewed by most amateur astronomers. However, Neptune is so far away from us that the angular size of its disk is small, about 2.3 arc seconds, so a moderate size telescope will be needed to show it. As an occultation of Neptune is a rare and wonderful occasion, I am sure most Astronomical Societies will be arranging ‘Star Parties’ so members can have the opportunity see the transit of through a large size telescope, please check with your organizers. If the event is not on the list, please suggest it as it is a wonderful photo-opportunity ...