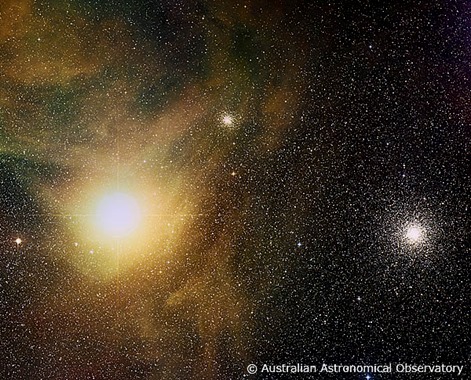 After observing Messier 4 Astronomers at the Anglo Australian Observatory have confirmed that in the first stars ‘premature death tends only to occur in the sodium-rich/oxygen-poor stars.’

Shining at Mag 6.4 it is now on view in the south after sunset.

M4, the star cluster at the right of the image, is one of the closest and brightest globular clusters, and has already been very well studied - it was a surprise to make such a striking discovery in our stellar backyard.

“Globular clusters are some of the oldest objects in the Universe. Although we have some ideas for what is going on in them, every time we look carefully we find something unexpected. They are both fascinating and frustrating at the same time!” - Professor John Lattanzio, Monash University 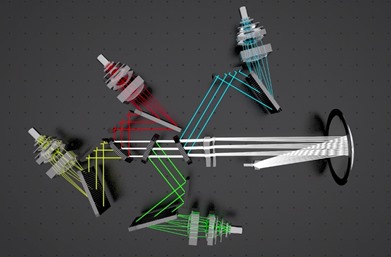 While the cause of this remains a mystery, the HERMES chemical analysis has revealed that premature death tends only to occur in the sodium-rich/oxygen-poor stars. This research would previously have been impossible to conduct in Australia, instead requiring the use of larger overseas’ telescopes. However, thanks to the recent construction and installation of the HERMES instrument, researchers can now use the AAT to analyse the chemical composition of up to 400 stars at a time. 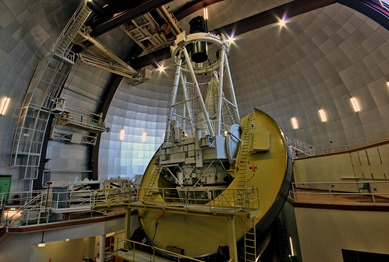 “HERMES represents a significant step forward for Australia’s observational capacity. This incredible advance is unique in that it combines multi-object capability with high data quality. Otherwise we are limited to observing one star at a time to collect such high quality data. This capability makes HERMES and the AAT competitive against some of the worlds’ biggest telescopes and a new tool for making breakthrough discoveries.” – Dr Gayandhi De Silva, AAO / University of Sydney.

The scientific motivation behind building HERMES was to carry out a large-scale survey of one million stars in the Galaxy. This Australian-led survey called GALAH will obtain precise measurements of the motions and chemical content of over 15 different chemical elements that will provide an unprecedented view of how stars in our galaxy formed and evolved. HERMES is available for use by the broader astronomical community and is under very high demand.