Did Jupiter form close to the infant Sun 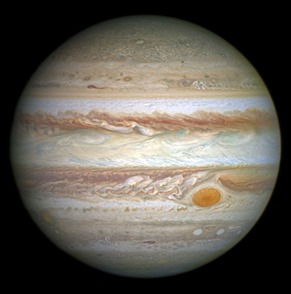 NASA’s Juno spacecraft which is due to arrive at the planet Jupiter on 4th July will help planetary scientists confirm the fascinating theory that the planet was originally a ‘hot Jupiter’ close to the new born sun.

OUR SOLAR SYSTEM was formed 4.5 billion years ago out of what is called the Solar Nebula or ‘protoplanetary-disk’. Using computer models a team of astronomers now believe that the Giant planet Jupiter was actually formed at the orbit of Mercury, and that the planet then migrated out to its present position in space.

At the moment Jupiter’s core is generally assumed to have formed beyond the snow line.

Now in a new research paper Sean N. Raymond and his team say that they now believe that Jupiter’s core may have accumulated in the innermost parts of the protoplanetary disk. A growing body of research suggests that small particles (“pebbles”) continually drift inward through the disk. If a fraction of drifting pebbles is trapped at the inner edge of the disk a several Earth-mass core can quickly grow. Subsequently, the core may migrate outward beyond the snow line via planet-disk interactions. Of course, to reach the outer Solar System Jupiter’s core must travel through the terrestrial planet-forming region (Mercury > Mars). 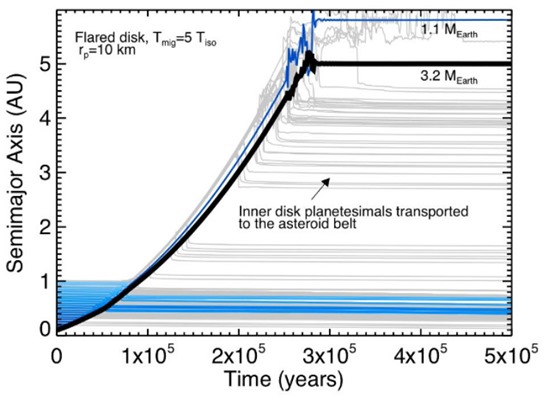 Figure 6: (Raymond et al.) The inner Solar System sculpted by Jupiter’s outward-migrating core. Embryos are shown in blue and planetesimal in gray. Embryos were dynamically cleared from the inner parts of the disk, creating a mass deficit similar to the actual one. The core’s outward migration also stimulated the formation of a second large core of 1:12 ME SATURN that survived at 5.8 AU, in 4:5 resonance with Jupiter’s core. Finally, planetesimal from very close to the Sun were transported outward by the core’s migration and deposited in the asteroid belt.

Sean N. Raymond and his team used N-body simulations including synthetic forces from an underlying gaseous disk to study how the outward migration of Jupiter’s core sculpts the terrestrial zone. If the outward migration is fast (104 million years), the core simply migrates past resident planetesimal and planetary embryos. However, if its migration is slower (105 million years) the core removes solids from the inner disk by shepherding objects in mean motion resonances. In many cases the disk interior to 0.5-1 AU is cleared of embryos and most planetesimal. By generating a mass deficit close to the Sun, the outward migration of Jupiter’s core may thus explain the absence of terrestrial planets closer than Mercury.

Jupiter’s migrating core would stimulates the growth of another large ( Earth-mass) core – that may provide a seed for Saturn’s core – trapped in exterior resonance. The migrating Jovian core may also transport a fraction of terrestrial planet forming debris, such as the putative parent bodies of iron meteorites, to the asteroid belt.