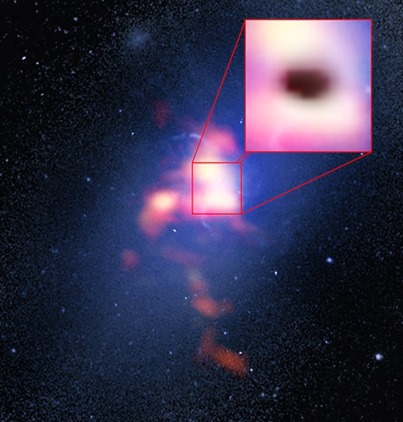 An international team of astronomers using the Atacama Large Millimeter/submillimeter Array (ALMA) has witnessed a cosmic weather event that has never been seen before — a cluster of towering intergalactic gas clouds raining in on the supermassive black hole at the centre of a huge galaxy one billion light-years from Earth. The results will appear in the journal Nature on 9 June 2016.

The background image (blue) is from the NASA/ESA Hubble Space Telescope. The foreground (red) is ALMA data showing the distribution of carbon monoxide gas in and around the galaxy. The pull-out box shows the ALMA data of the "shadow" (black) produced by absorption of the millimetre-wavelength light emitted by electrons whizzing around powerful magnetic fields generated by the galaxy's supermassive black hole. The shadow indicates that cold clouds of molecular gas are raining in on the black hole.

The new ALMA observations are the first direct evidence that cold dense clouds can coalesce out of hot intergalactic gas and plunge into the heart of a galaxy to feed its central supermassive black hole. It also reshapes astronomers’ views on how supermassive black holes feed, in a process known as accretion.

Previously, astronomers believed that, in the largest galaxies, supermassive black holes fed on a slow and steady diet of hot ionised gas from the galaxy’s halo. The new ALMA observations show that, when the intergalactic weather conditions are right, black holes can also gorge on a clumpy, chaotic downpour of giant clouds of very cold molecular gas. 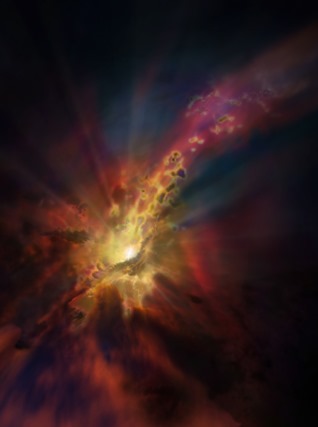 “Although it has been a major theoretical prediction in recent years, this is one of the first unambiguous pieces of observational evidence for a chaotic, cold rain feeding a supermassive black hole,” said Grant Tremblay, an astronomer with Yale University in New Haven, Connecticut, USA, former ESO Fellow, and lead author on the new paper. “It’s exciting to think we might actually be observing this galaxy-spanning rainstorm feeding a black hole whose mass is about 300 million times that of the Sun.”

Tremblay and his team used ALMA to peer into an unusually bright cluster of about 50 galaxies, collectively known as Abell 2597. At its core is a massive elliptical galaxy, descriptively named the Abell 2597 Brightest Cluster Galaxy. Suffusing the space between these galaxies is a diffuse atmosphere of hot ionised gas, which was previously observed with NASA’s Chandra X-ray Observatory.

"This very, very hot gas can quickly cool, condense, and precipitate in much the same way that warm, humid air in Earth's atmosphere can spawn rain clouds and precipitation," Tremblay said. "The newly condensed clouds then rain in on the galaxy, fueling star formation and feeding its supermassive black hole."

Near the centre of this galaxy the researchers discovered just this scenario: three massive clumps of cold gas are careening toward the supermassive black hole in the galaxy’s core at about a million kilometres per hour. Each cloud contains as much material as a million Suns and is tens of light-years across.

Normally, objects on that scale would be difficult to distinguish at these cosmic distances, even with ALMA’s amazing resolution. They were revealed, however, by the billion-light-year-long “shadows” they cast toward Earth [1].

Additional data from the National Science Foundation’s Very Long Baseline Array indicate that the gas clouds observed by ALMA are only about 300 light-years from the central black hole, essentially teetering on the edge of being devoured, in astronomical terms.

While ALMA was only able to detect three clouds of cold gas near the black hole, the astronomers speculate that there may be thousands like them in the vicinity, setting up the black hole for a continuing downpour that could fuel its activity for a long time.

The astronomers now plan to use ALMA to search for these "rainstorms" in other galaxies in order to determine whether such cosmic weather is as common as current theory suggests it might be.