The birth of the Sun 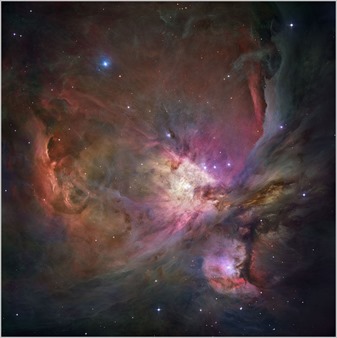 Anyone who looks at the Orion nebula (M42) in the sky are seeing a stellar nursery. This nebula, extending about 20 light-years across, is one of the most prominent regions in which active star formation can be observed today.

The cloud of cool and dense molecular hydrogen and dust in which new stars are being born is impenetrable to visible observers. It is therefore not possible for us to directly witness a star’s birth. Only with observations in the infrared wavelengths can the various processes in the inner parts of the cloud be investigated.

Another is the famous nebula, Messier 16, in the southern constellation of Scutum (the Shield). The nebula contains several active star-forming regions, including the famous Pillars of Creation shown below.

Many similar nebulae are found in the Milky Way, and other galaxies, that allow us to study how stars are born. These molecular clouds cool down as their molecules release energy in the form of radio waves; the surrounding stars' radiation heats the clouds from the outside. 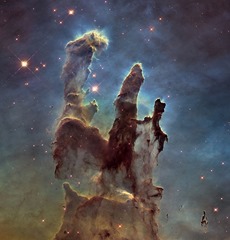 The result is turbulence within the cloud, causing it to heat up to a temperature of about -173 °C. Individual dense clumps, called globules, are also present in the cloud. They are roughly at -263 °C and are shielded from the irradiation by other stars by layers of gas and interstellar dust. This allows them to maintain their low temperature.

When the balance between gravity pulling inward and thermal radiation pushing outward is upset in these globules, they collapse and become denser. The compression of the gas releases gravitational energy, which is converted into heat energy, and is radiated away into the surrounding area. If the gas continues to condense even further, a protostar can finally form.

Hot Protostars are giant spheres of gas still inside their dense molecular birth cloud. Although nuclear fusion is not yet taking place, they are already radiating energy into the cloud. This loss of energy is balanced by the release of gravitational energy coming from the contraction of the forming stars’ mass. Despite this radiation loss, Protostars continue to heat up. 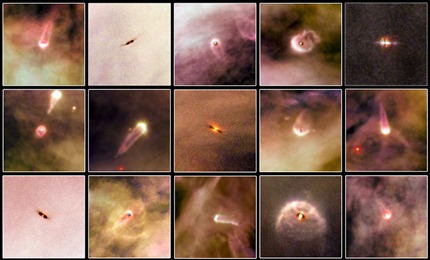 Astronomers call young stars with surrounding clouds of circumstellar material ‘Proplyds.’ these images of the inner regions of the Orion nebulae show several Proplyds. The light cusps around them are caused by the fluorescence of the light from the multiple star Theta-Orionis in the middle of the nebula.

During this process, new material in the form of gas continues to fall onto the rotating protostar. It does not plunge directly into the star but collects into a disk spiralling around the emerging object. The material is eventually flung off the inner edge of this accretion disk onto the star. The continued accumulation of mass leads to increased weight and pressure of the core region causing it to further heat up.

The young star discards part of the incoming material back into its dust cloud. These fountains, usually referred to as jets, align with the protostar's rotational axis. Where the jet hits the surrounding gas cloud with full force, astronomers detect a bright glow; this is known as a Herbig-Haro object. As time passes, the increasing radiation and the effect of the jets gradually free the protostar from its molecular-cloud.

These young stars are called T Tauri stars after the variable star of the same name. These have enormous surfaces and are sometimes up to 100 times larger than the Sun. The energy they radiate per unit of time as well as their luminosity is immense.

The centres of these forming stars are still too cool for nuclear fusion to ignite, but their steady collapse generates enough heat energy for them to shine with a fairly steady luminosity for many mil¬lions of years. These young stars still rotate rapidly, about 10 times as fast as the Sun. They also expel a lot of gas from their surfaces which periodically alter their luminosities.

Only with time do these stars get hot enough for their first few nuclear reactions to eventually take place in their core region. At a central temperature of about 1 million degrees, the already present deuterium nuclei fuse into helium. Deuterium burning begins. It slowly eats its way through the star, steadily raising its temperature before hydrogen burning can finally begin at 10 million degrees.

From that moment, fusion energy is released and remains the star’s source of energy for the rest of its life. With the ignition of nuclear fusion after 100 million years, a young T Tauri star becomes a proper adult star. This is how our Sun sprang to life, and the young solar system then began to evolve into what we see today.

THE SUN IN ACTION