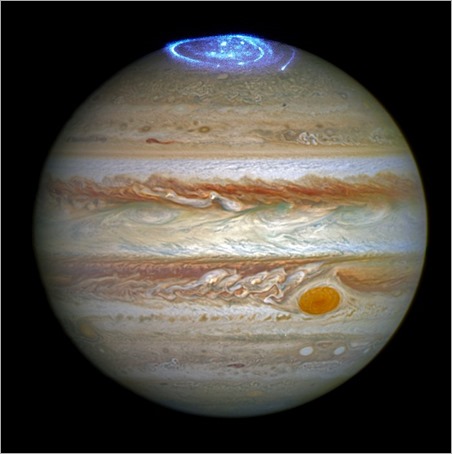 Astronomers are using the NASA/ESA Hubble Space Telescope to study auroras — stunning light shows in a planet’s atmosphere — on the poles of the largest planet in the Solar System, Jupiter.

I asked Dr Jonathan Nichols of the University of Leicester, for further information on these new Jupiter images.

“These particular images were obtained on 19 May and 2 June as part of a series of observations during the Juno approach phase.

“The base of the auroral curtain is at 240 km (150 miles) above the 1 bar level, and the curtain extends around a thousand km (620 miles) in altitude.

“The auroras are so intense owing to the strong magnetic field of Jupiter and the planet's fast rotation - most of the auroral power derives from the outflow of plasma originating from Io. The role of the solar wind is not known - and one of the questions being examined using these data.

“We are taking data now and we'll have another set of observations 10-18 July after Juno Orbital Insertion. We'll also have a large program starting.” in November during the main phase of the mission.”

This observation programme is supported by measurements made by NASA’s Juno spacecraft, currently on its way to Jupiter.

Jupiter, the largest planet in the Solar System, is best known for its colourful storms, the most famous being the Great Red Spot. Now astronomers have focused on another beautiful feature of the planet, using the ultraviolet capabilities of the NASA/ESA Hubble Space Telescope.

The extraordinary vivid glows shown in the new observations are known as auroras. They are created when high energy particles enter a planet’s atmosphere near its magnetic poles and collide with atoms of gas. As well as producing beautiful images, this programme aims to determine how various components of Jupiter’s auroras respond to different conditions in the solar wind, a stream of charged particles ejected from the Sun.

This observation programme is perfectly timed as NASA’s Juno spacecraft is currently in the solar wind near Jupiter and will enter the orbit of the planet in early July 2016. While Hubble is observing and measuring the auroras on Jupiter, Juno is measuring the properties of the solar wind itself; a perfect collaboration between a telescope and a space probe.

“These auroras are very dramatic and among the most active I have ever seen”, says Jonathan Nichols from the University of Leicester, UK, and principal investigator of the study. “It almost seems as if Jupiter is throwing a firework party for the imminent arrival of Juno.”

To highlight changes in the auroras Hubble is observing Jupiter daily for around one month. Using this series of images it is possible for scientists to create videos that demonstrate the movement of the vivid auroras, which cover areas bigger than the Earth.

Not only are the auroras huge, they are also hundreds of times more energetic than auroras on Earth. And, unlike those on Earth, they never cease. Whilst on Earth the most intense auroras are caused by solar storms — when charged particles rain down on the upper atmosphere, excite gases, and cause them to glow red, green and purple — Jupiter has an additional source for its auroras.

The strong magnetic field of the gas giant grabs charged particles from its surroundings. This includes not only the charged particles within the solar wind but also the particles thrown into space by its orbiting moon Io, known for its numerous and large volcanos.

The new observations and measurements made with Hubble and Juno will help to better understand how the Sun and other sources influence auroras. While the observations with Hubble are still ongoing and the analysis of the data will take several more months, the first images and videos are already available and show the auroras on Jupiter’s north pole in their full beauty.