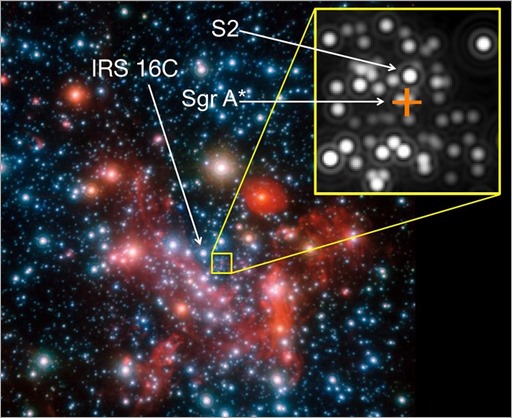 A European team of astronomers have used the new GRAVITY instrument at ESO’s Very Large Telescope to obtain exciting observations of the centre of the Milky Way by combining light from all four of the 8.2-metre Unit Telescopes for the first time.

These results provide a taste of the ground-breaking science that GRAVITY will produce as it probes the extremely strong gravitational fields close to the central supermassive black hole and tests Einstein’s general relativity.

The GRAVITY instrument is now operating with the four 8.2-metre Unit Telescopes of ESO’s Very Large Telescope (VLT), and even from early test results it is already clear that it will soon be producing world-class science.

GRAVITY is part of the VLT Interferometer. By combining light from the four telescopes it can achieve the same spatial resolution and precision in measuring positions as a telescope of up to 130 metres in diameter. The corresponding gains in resolving power and positional accuracy — a factor of 15 over the individual 8.2-metre VLT Unit Telescopes — will enable GRAVITY to make amazingly accurate measurements of astronomical objects.

One of GRAVITY’s primary goals is to make detailed observations of the surroundings of the 4 million solar mass black hole at the very centre of the Milky Way [1]. Although the position and mass of the black hole have been known since 2002, by making precision measurements of the motions of stars orbiting it, GRAVITY will allow astronomers to probe the gravitational field around the black hole in unprecedented detail, providing a unique test of Einstein’s general theory of relativity.

In this regard, the first observations with GRAVITY are already very exciting. The GRAVITY team [2] has used the instrument to observe a star known as S2 as it orbits the black hole at the centre of our galaxy with a period of only 16 years. These tests have impressively demonstrated GRAVITY’s sensitivity as it was able to see this faint star in just a few minutes of observation.

The team will soon be able to obtain ultra-precise positions of the orbiting star, equivalent to measuring the position of an object on the Moon with centimetre precision. That will enable them to determine whether the motion around the black hole follows the predictions of Einstein’s general relativity — or not. The new observations show that the Galactic Centre is as ideal a laboratory as one can hope for. 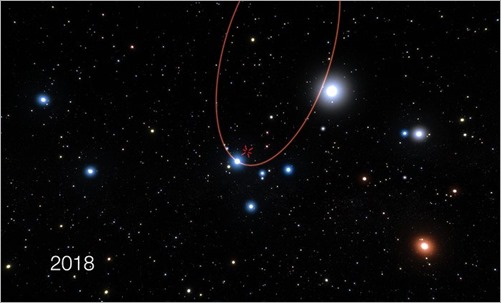 "It was a fantastic moment for the whole team when the light from the star interfered for the first time — after eight years of hard work," says GRAVITY’s lead scientist Frank Eisenhauer from the Max Planck Institute for Extra-terrestrial Physics in Garching, Germany. "First we actively stabilised the interference on a bright nearby star, and then only a few minutes later we could really see the interference from the faint star — to a lot of high-fives.” At first glance neither the reference star nor the orbiting star have massive companions that would complicate the observations and analysis. "They are ideal probes," explains Eisenhauer.

This artist’s impression shows stars orbiting the supermassive black hole at the centre of the Milky Way. In 2018 one of these stars, S2, will pass very close to the black hole and this event will be the best opportunity to study the effects of very strong gravity and test the predictions of Einstein’s general relativity in the near future. The orbit of S2 is shown in red and the position of the central black hole is marked with a red cross.

This early indication of success does not come a moment too soon. In 2018 the S2 star will be at its closest to the black hole, just 17 light-hours away from it and travelling at almost 30 million kilometres per hour, or 2.5% of the speed of light. At this distance the effects due to general relativity will be most pronounced and GRAVITY observations will yield their most important results [3]. This opportunity will not be repeated for another 16 years.