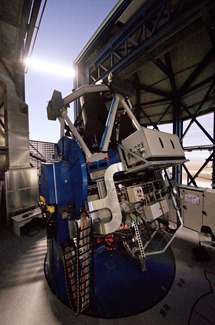 Astronomers hunt for planets orbiting other stars (exoplanets) using a variety of methods. One successful method is direct imaging; this is particularly effective for planets on wide orbits around young stars, because the light from the planet is not overwhelmed by light from the host star and is thus easier to spot.

This image demonstrates this technique. It shows a T-Tauri star named CVSO 30, located approximately 1200 light-years away from Earth in the 25 Orionis group (slightly northwest of Orion’s famous Belt). In 2012, astronomers found that CVSO 30 hosted one exoplanet (CVSO 30b) using a detection method known as transit photometry, where the light from a star observably dips as a planet travels in front of it. Now, astronomers have gone back to look at the system using a number of telescopes. The study combines observations obtained with the ESO’s Very Large Telescope (VLT) in Chile, the W. M. Keck Observatory in Hawaii, and the Calar Alto Observatory facilities in Spain. 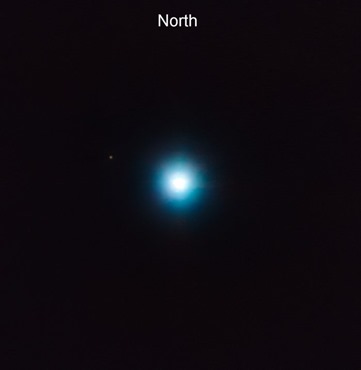 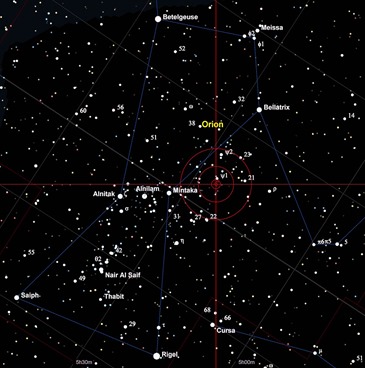 Using the data astronomers have imaged what is likely to be a second planet! To produce the image, astronomers exploited the astrometry provided by VLT’s NACO and SINFONI instruments.

This new exoplanet, named CVSO 30c, is the small dot to the upper left of the frame (the large blob is the star itself). While the previously-detected planet, CVSO 30b, orbits very close to the star, whirling around CVSO 30 in just under 11 hours at an orbital distance of 0.008 au, CVSO 30c orbits significantly further out, at a distance of 660 au, taking a staggering 27 000 years to complete a single orbit. (For reference, the planet Mercury orbits the Sun at an average distance of 0.39 au, while Neptune sits at just over 30 au.)

If it is confirmed that CVSO 30c orbits CVSO 30, this would be the first star system to host both a close-in exoplanet detected by the transit method and a far-out exoplanet detected by direct imaging. Astronomers are still exploring how such an exotic system came to form in such a short timeframe, as the star is only 2.5 million years old; it is possible that the two planets interacted at some point in the past, scattering off one another and settling in their current extreme orbits.