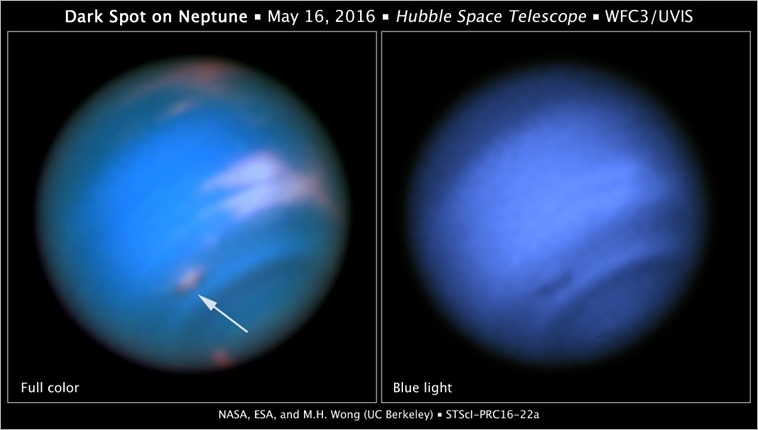 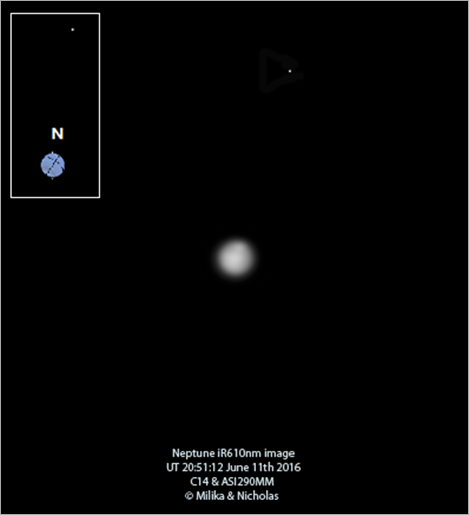 The discovery was announced on May 17, 2016, in a Central Bureau for Astronomical Telegrams (CBAT) electronic telegram by University of California at Berkeley research astronomer Mike Wong, who led the team that analysed the Hubble data.

This image of Neptune by Darryl Pfitzner Milika & Pat Nichols was taken on 11 June 2016. Darryl lives in south Australia.

Neptune's dark vortices are high-pressure systems and are usually accompanied by bright "companion clouds," which are also now visible on the distant planet. The bright clouds form when the flow of ambient air is perturbed and diverted upward over the dark vortex, causing gases to likely freeze into methane ice crystals. "Dark vortices coast through the atmosphere like huge, lens-shaped gaseous mountains," Wong said. "And the companion clouds are similar to so-called orographic clouds that appear as pancake-shaped features lingering over mountains on Earth."

Beginning in July 2015, bright clouds were again seen on Neptune by several observers, from amateurs to astronomers at the W. M. Keck Observatory in Hawaii. Astronomers suspected that these clouds might be bright companion clouds following an unseen dark vortex. Neptune's dark vortices are typically only seen at blue wavelengths, and only Hubble has the high resolution required for seeing them on distant Neptune. 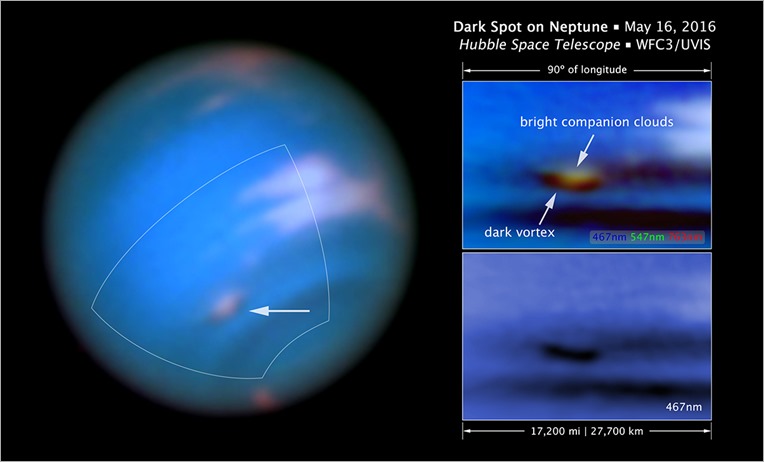 In September 2015, the Outer Planet Atmospheres Legacy (OPAL) program, a long-term Hubble Space Telescope project that annually captures global maps of the outer planets, revealed a dark spot close to the location of the bright clouds, which had been tracked from the ground. By viewing the vortex a second time, the new Hubble images confirm that OPAL really detected a long-lived feature. The new data enabled the team to create a higher-quality map of the vortex and its surroundings.

Neptune's dark vortices have exhibited surprising diversity over the years, in terms of size, shape, and stability (they meander in latitude, and sometimes speed up or slow down). They also come and go on much shorter timescales compared to similar anticyclones seen on Jupiter; large storms on Jupiter evolve over decades.

Planetary astronomers hope to better understand how dark vortices originate, what controls their drifts and oscillations, how they interact with the environment, and how they eventually dissipate, according to UC Berkeley doctoral student Joshua Tollefson, who was recently awarded a prestigious NASA Earth and Space Science Fellowship to study Neptune's atmosphere. Measuring the evolution of the new dark vortex will extend knowledge of both the dark vortices themselves, as well as the structure and dynamics of the surrounding atmosphere.