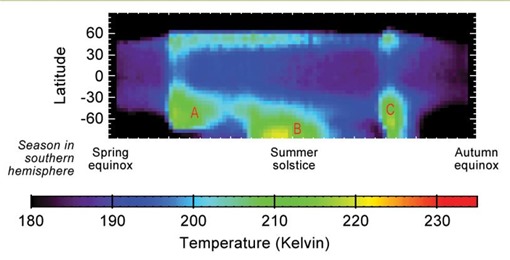 NASA have released two two image graphics showing the variations in temperature in the Martian atmosphere during dust storm activity on Mars.

The timing is interesting because a new dust storm is now underway on Mars.

This first graphic shows Martian atmospheric temperature data related to seasonal patterns in occurrence of large regional dust storms. The data shown here were collected by the Mars Climate Sounder instrument on NASA's Mars Reconnaissance Orbiter over the course of one-half of a Martian year, during 2012 and 2013. The colour coding indicates daytime temperatures of a layer of the atmosphere cantered about 16 miles (25 kilometres) above ground level, corresponding to the colour-key bar at the bottom of the graphic.

The vertical axis is latitude on Mars, from the north pole at the top to south pole at the bottom. Each graphed data point is an average for all Martian longitudes around the planet. The horizontal axis is the time of year, spanning from the beginning of Mars' southern-hemisphere spring (on the left) to the end of southern-hemisphere summer. This is the half of the year when large Martian dust storms are most active. 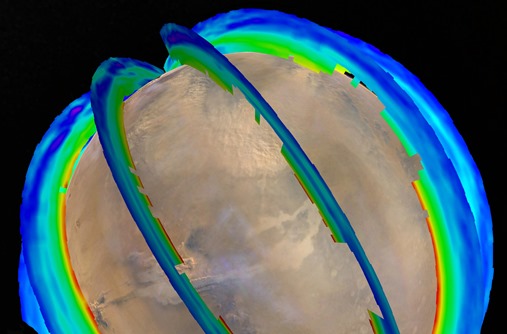 On the right, this graphic overlays Martian atmospheric temperature data as curtains over an image of Mars taken during a regional dust storm. The temperature profiles extend from the surface to about 50 miles (80 kilometres) up. Temperatures are colour coded, ranging from minus 243 degrees Fahrenheit (minus 153 degrees Celsius) where coded purple to minus 9 F (minus 23 C) where coded red.

The temperature data and global image were both recorded on Oct. 18, 2014, by instruments on NASA's Mars Reconnaissance Orbiter: Mars Climate Sounder and Mars Colour Imager. On that day a regional dust storm was active in the Acidalia Planitia region of northern Mars, at the upper center of this image. A storm from this area in typically travels south and grows into a large regional storm in the southern hemisphere during southern spring.

That type of southern-spring storm and two other large regional dust storms repeat as a three-storm series most Martian years. The pattern has been identified from their effects on atmospheric temperature in a layer about 16 miles (25 kilometres) above the surface.