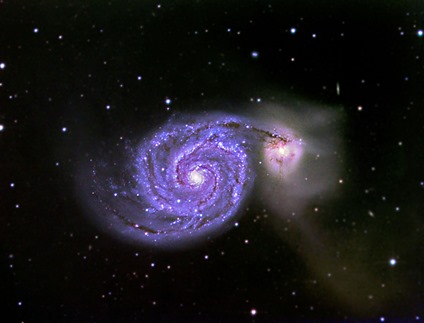 This month the Sky at Night is focusing all its attention on one object M51 aka The Whirlpool Galaxy.

Sitting approximately 30 million light years from Earth, this spectacular spiral galaxy was first discovered in 1773 by the French astronomer Charles Messier. It is thought to have been the inspiration behind the swirling patterns of van Gogh’s Starry Night, and ever since it has fascinated astronomers and star watchers.

So for this month’s Sky at Night we have declared June 1st Whirlpool Galaxy Day. On this one day we will be aiming as many telescopes as possible at the galaxy. Images will be taken by optical and infra-red telescopes on top of volcanoes in Hawaii and La Palma, the radio signature will be captured at the Mullard Radio Astronomy Observatory in Cambridge and in orbit the Swift space telescope will aim its ultraviolet and X-ray sensors at the galaxy.

By examining the galaxy at as many magnifications and wavelengths as possible the programme (to be broadcast on BBC Four at 2200 on Sunday 12th June) will build up a portrait of this galaxy – unlocking the secrets of the formation of the spiral arms and revealing how they have triggered a wave of intense star formation.

We also want your pictures of the Whirlpool. If you have telescope with a camera attachment take it out on the night of May 31st/June 1st (or the following night if the skies aren’t clear) and point it at M51 (Coordinates: RA 13° 29' 53" | Dec 47° 11.718'. Then send us your images to SkyAtNight@bbc.co.uk or add them to our Flickr group (https://www.flickr.com/groups/bbcskyatnight).