Discovery of rings in the HD141569A debris disk 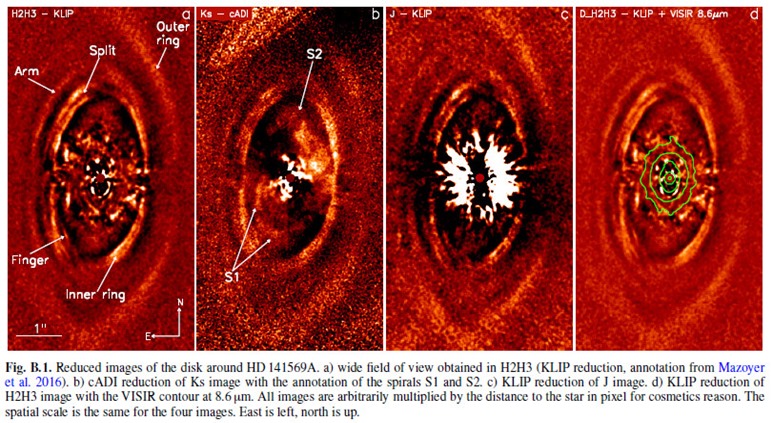 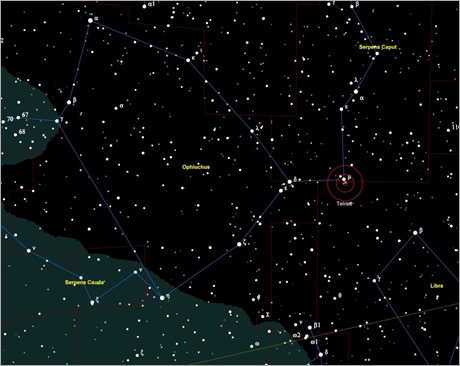 This Picture of the Week illustrates the remarkable capabilities of SPHERE (the Spectro-Polarimetric High-contrast Exoplanet REsearch instrument), a planet-hunting instrument mounted on ESO’s Very Large Telescope (VLT) in Chile: It shows a series of broken rings of dust around a nearby star. These concentric rings are located in the inner region of the debris disc surrounding a young star named HD 141569A, which sits some 370 light-years away from us.

Debris disks are usually thought to be gas-poor, the gas being dissipated by accretion or evaporation during the protoplanetary phase. HD141569A is a 5 million year old star harbouring a famous debris disk, with multiple rings and spiral features. The analysis reveals there is still a large amount of (primordial) gas extending out to 250 AU inside the rings observed in scattered light. HD141569A is thus a hybrid disk with a huge debris component, where dust has evolved and is produced by collisions, with a large remnant reservoir of gas.

In this image we see what is known as a transition disc, a short-lived stage between the protoplanetary phase, when planets have not yet formed, and a later time when planets have coalesced, leaving the disc populated only by any remaining — and predominantly dusty — debris. 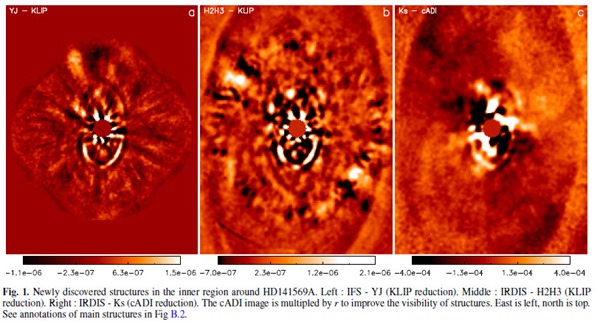 What we see here are structures formed of dust, revealed for the first time in near-infrared light by SPHERE — at a high enough resolution to capture remarkable detail! The area shown in this image has a diameter of just 200 times the Earth–Sun distance.

Several features are visible, including a bright, prominent ring with well-defined edges — so asymmetric that it appears as a half-ring — multiple clumps, several concentric ringlets, and a pattern akin to a spiral arm. It is significant that these structures are asymmetric; this may reflect an uneven, or clumpy, distribution of dust in the disc, something for which astronomers do not currently have a firm explanation. It is possible that this phenomenon is caused by the presence of planets, but so far no planets of sufficient size to do this have been found in this system.

During the formation of a Sun-like star, the object passes through the T-Tauri phase during which it is surrounded by a disk-shaped nebula. Out of this material are formed planetesimals, which can undergo an accretion process to form planets. The nebula continues to orbit the pre-main-sequence star for a period of 1–20 million years until it is cleared out by radiation pressure and other processes. Additional dust may then be generated about the star by collisions between the planetismals, which forms a disk out of the resulting debris. At some point during their lifetime, at least 45% of these stars are surrounded by a debris disk, which then can be detected by the thermal emission of the dust using an infrared telescope. Repeated collisions can cause a disk to persist for much of the lifetime of a star.