Astronomers have successfully measured one of the four fundamental forces of nature – electromagnetism – using the light from a quasar known as HE 0515-4414, which passed through a series of distant galaxies on its way to reaching us some 8.5 billion years ago.

A quasar is the area around a supermassive black hole that produces extremely bright and powerful jets of energy as mass from its surrounding galaxy falls into the black hole.

The quasar HE 0515-4414 is one of the brightest anyone has ever seen, and that means researchers can use it like a torch - or, more accurately, a cosmic barcode scanner - to shine through galaxies between it and Earth and reveal insights about how they work.

One thing researchers are particularly interested in is how the four fundamental forces of nature work in the far reaches of space. Those four forces are gravity, electromagnetism, and the strong and weak nuclear force.

The precise values of those fundamental forces are crucial to life being able to exist here on Earth, and it's generally assumed that they're the same across the Universe. But it's hard to say for sure, because we can only study them properly here on Earth.

For the new study, the team from Swinburne University in Australia and the University of Cambridge in the UK used a quasar to peer into a galaxy 8.5 billion light-years away, and see if works the same way as on our own planet. 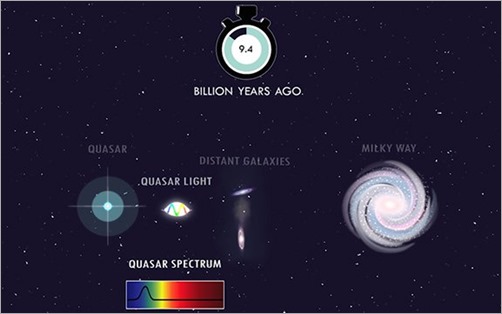 "Electromagnetism determines almost everything about our everyday world, like the light we receive from the Sun, how we see that light, how sound travels through the air, the size of atoms and how they interact," explains one of the team, Michael Murphy from Swinburne University.

"But no one knows why electromagnetism has the strength it has and whether it should be constant, or vary, and why."

The team used spectrographs – 'light rulers', as they are commonly known – on board the European Southern Observatory’s (ESO’s) Very Large Telescope (VLT) and 3.6-m Telescope in Chile to measure patterns of colours inside the quasar’s light.

"The VLT's spectrograph is a little inaccurate: it's a high-quality ruler for measuring light, but the numbers on that ruler are a little offset," said lead author Srđan Kotuš, also from Swinburne University.

"So, to make the best measurement, we also used the 3.6-m Telescope's spectrograph to provide very accurate numbers."

The team was able to use these tools to measure how the light from the quasar changes as it passed through galaxies on its way to Earth, showing how strong electromagnetism is in these distant galaxies.

They then compared that number to the one commonly found in the Milky Way - just like cross-checking a couple of barcodes.

To better visualise this, check out this quick video the team made: 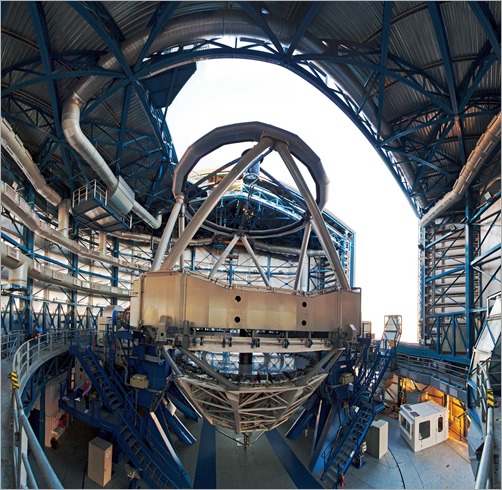 As you can see, the light from the quasar is filtered by the galaxy, providing insights into how strong electromagnetism is there.

"The pattern of colours tells us how strong electromagnetism is in this galaxy, and because the quasar is one of the brightest ones known, we were able to make the most precise measurement so far," explains Kotuš.

In the end, they found that the electromagnetic force in the distant galaxy is the same as here on Earth, suggesting that researchers have been correct in their suspicions that electromagnetism is a constant of nature.

"We found electromagnetism in this galaxy was the same as here on Earth within just one part per million – about the width of a human hair compared to the size of a sports stadium," says Kotuš.

While the finding definitely helps us better understand a fundamental force, the team still has many questions, such as why is it a constant in the first place? How did it come to be this way?

"For me, finding that electromagnetism is constant over more than half the Universe's age just deepens the mystery – why is it that way? We still don't know," says Murphy.

"It's remarkable that distant galaxies provide such a precise probe of such a fundamental question. With even larger telescopes now being built, we'll be able to test it even better in the near future."

Hopefully, as astronomers gain access to more sophisticated and precise tools, they will be able to answer some of these fundamental questions, giving all of us a better understanding of our own planet, Solar System, and the Universe at large.

The team’s work was published in Monthly Notices of the Royal Astronomical Society.