It has been awhile since I posted anything to this site. The launch of OSIRIS-REx was such an amazing, emotional experience; it took me about a month to come back down to Earth (pun intended). I have now settled into a normal work routine in Tucson and the team has been busy operating the spacecraft and planning for the encounter with Bennu in 2018. We are now in the Outbound Cruise phase of the mission.

We Have a Healthy Spacecraft

After launch-vehicle separation, the spacecraft was placed into the “Sun point” attitude (+X spacecraft axis toward the sun) with the solar arrays off-pointed from the sun by 45 degrees. This attitude ensures that the spacecraft will collect sufficient power to remain power positive at all times while keeping the other components from experiencing direct solar heating. 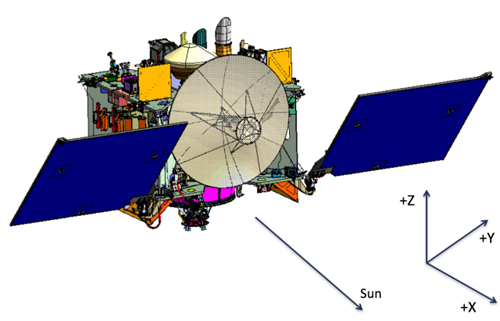 The propulsion system has been performing well. Momentum dumps using the Attitude Control System (ACS) thrusters are occurring as planned. During these manoeuvres, reaction wheel momentum is unloaded by firing the ACS thrusters. Reaction wheels are flywheels that use electric motors to change their rotation speed. As the wheels rotate, the spacecraft counter-rotates as a result of the conservation of angular momentum.  Wheel speeds are generally maintained below 3000 RPM which requires desaturation of the built-up angular momentum approximately once every seven days.

We also executed our first Trajectory Correction Manoeuvre (TCM-1) using the TCM thrusters. This manoeuvre was placed into the mission plan to clean up any errors introduced by the Atlas V launch vehicle. However, since the Atlas V performance was nearly perfect, we re-designed TCM-1 as a minimal engineering burn, just to check out the TCM thruster performance. Our first major manoeuvre using the spacecraft main engines is Deep Space Manoeuvre #1 (DSM-1), which will be executed on December 28th, 2016. The preliminary design cycle for this manoeuvre has begun, with a DSM-1 Readiness Review planned for December 1st.

As part of checking out the flight system, we turned on all of the science instruments and ran them through some basic functional check outs. I am happy to report that OCAMS, OVIRS, OTES, OLA, and REXIS all completed post-launch aliveness checkouts with no major issues.  OCAMS is investigating stray light effects which appear to be due to sunlight reflecting off PolyCam and OTES protruding from the +Z deck. We don’t expect this stray light to be an issue in operations but we are building a detailed optical model of the science deck and planning a follow-on characterization campaign later in Outbound Cruise. This model will allow us to maximize the science value of our imaging campaigns and ensure that stray light does not degrade our science data.

We also switched on the Touch and Go Camera System (TAGCAMS) and successfully acquired 19 images of star fields and spacecraft hardware. TAGCAMS is not part of the science payload; it is considered a component of the spacecraft Guidance, Navigation, and Control system. The purpose of TAGCAMS is to provide imagery during the mission to facilitate navigation to the target asteroid, acquisition of the asteroid sample and confirmation of asteroid sample stowage. The cameras were designed and built by Malin Space Science Systems (MSSS) based on requirements developed by Lockheed Martin and the OSIRIS-REx project. 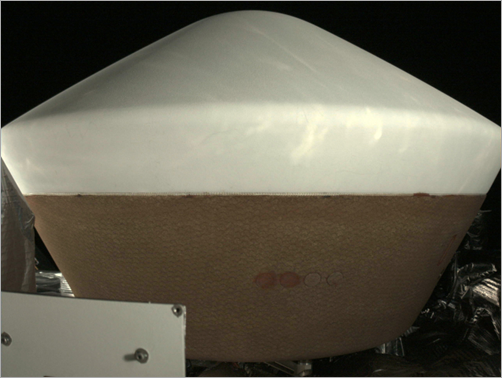 Right | The StowCam views the Sample Return Capsule in flight. This view will be critical as we stow the TAGSAM head with the collected Bennu sample for Earth return.

We still have many activities planned for Outbound Cruise. We will perform a thorough instrument calibration campaign at Launch + 6 months. We are busy planning for an extensive instrument check out and characterization during the Earth Gravity Assist in September 2017. We also have some tricks up our sleeves, with a science observing campaign planned for February 2017. Stay tuned for more details about this exciting activity in future blog posts.

Overall, the launch and early checkout of the OSIRIS-REx flight system has gone flawlessly. We have an amazing spacecraft and an extremely talented operations team. There is a lot of work to do to get ready for the encounter with Bennu in August 2018. However, we have the right equipment and the right team to get this job done successfully. With sample acquisition nominally scheduled for July 2020, OSIRIS-REx promises to be a highlight of planetary exploration over the next four years.