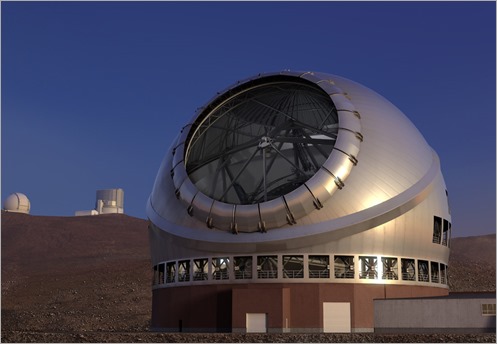 India has lost out on being the destination for the world's largest telescope. There was a lot of anticipation that the giant Thirty Meter Telescope (TMT) would get housed at a remote high- altitude site in the cold desert of Ladakh in Jammu and Kashmir.

This week members of the multi-country coalition that is spearheading it decided to build the telescope in the Canary Islands in the Atlantic Ocean. A telescope that would cost upwards of $ 2 billion by the time it is becomes operational in 2025.

Many say this was a much favoured project of Prime Minister Narendra Modi since within four months of taking over, the TMT project found favour with the National Democratic Alliance and was one of the first mega science projects cleared by Modi's cabinet. Studying the origins of the universe and deciphering what is dark energy would be the key objectives of this mega global exercise.

According to a report by the Indian government, "The TMT will enable scientists to study fainter objects far away from Earth in the Universe, which gives information about early stages of evolution of the Universe."

Also, it will give scientists finer details of not-so-far- away objects like undiscovered planets and other objects in the solar system and planets around other stars. TMT being the largest optical and infrared telescope in the northern hemisphere would enable several discoveries. Competing with the TMT is the 39-m-diameter European Extremely Large Telescope that is likely to come up in Chile, which if all goes well should see first light in 2024.

The preferred site to house the giant TMT was on a 4050-m- high mountain in Hawaii called Mauna Kea but the local courts in Hawaii heard protest petitions from the local people who felt the making of the telescope violated a 'sacred site' and in 2015 much against the wishes of the global scientific community construction was halted at Hawaii on orders of the court.

This led to a lot of uncertainty. Since then a search was made for the best alternative sites and Hanle in India at 4500 metres in the cold dry environs of the Himalayas was very actively considered. At Hanle, India already houses the world's highest optical telescope run by the Indian Institute of Astrophysics (IIAP), Bengaluru.