Next year, a network of radio telescopes will do something that’s never been done before: capture a picture of the mysterious inside of Sagittarius A, the black hole in the middle of the Milky Way galaxy. The Event Horizon Telescope Project is scheduled to take the very first snapshot of a black hole’s event horizon by April 2017.

The project consists of nine different observatories all over the world— located in the US, Chile, Spain, Greenland, France, and even the South Pole. And they’ll need all that power to get their shot.

“There are quite a few challenges that need to be overcome to take a picture of a black hole – it’s something that’s extremely small in the sky,” says EHT team member Feryal Ozel. 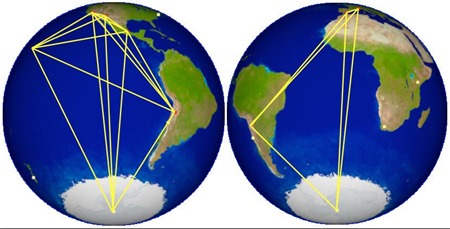 Astronomers had to determine the right wavelength of light they would use for the process. They settled on 1.3mm, which can pierce the black hole’s dust clouds, allow hot gasses to shine brightly, and travel easily through the atmosphere.

The end goal of this is not just to take pretty pictures. Ultimately, the EHT will prove one of the most fundamental tenets of physics: general relativity.

Einstein’s tenet says that black holes bend spacetime, and that we can calculate that bend. So the pictures we get from the EHT have to show a crescent, and it has to be bent the right way, or else something is wrong with our physics models.

“We know exactly what GR predicts for that size,” Prof Ozel said – making this observation what scientists call a “null hypothesis test” of the theory.

Ultimately, projects like the EHT allow us to prove what were only theories decades ago, and teach us a lot about the workings of the universe in the process.  Technology is helping us to better see (and understand) our universe.