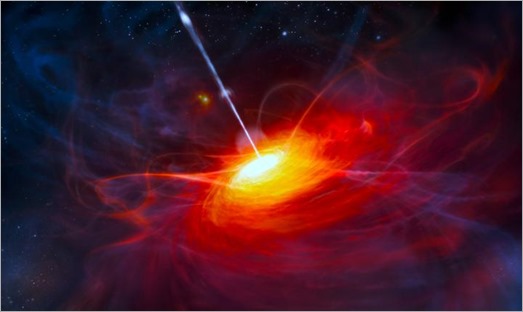 Galaxies formed and grew billions of years ago by accumulating gas from their surroundings, or colliding and merging with other young galaxies. These early stages of galaxy assembly are believed to be accompanied by episodes of rapid star formation, known as starbursts, and rapid growth of a single super-massive black hole in the galactic centers.

A popular paradigm for this evolution has the black holes growing mostly in obscurity, buried deep within the dusty gas. These are rich star-forming galaxies until a blowout of gas and dust (outflow) extinguishes the star formation and halts further growth in the black holes. The outflow then reveals a luminous, rapidly growing black hole in the galactic nucleus. These are known as quasars.

Quasars can eject material at high speeds, possibly helping to drive the blowout and regulate star formation in their host galaxies. However, many aspects of this evolutionary scheme are not understood. Quasars that are partially obscured by dust, which reddens their light in a way that is similar to the sun viewed during sunsets on earth, might provide windows into galactic evolution during the brief transition stage when the starburst is winding down and the visibly luminous quasar is first being revealed in the galactic centre.

New research, led by Frederick Hamann, a professor at the Department of Physics and Astronomy at University of California, Riverside, describes the discovery of a unique new population of extremely red quasars. The findings were recently published in the journal the Monthly Notices of the Royal Astronomical Society.

The work by Hamann, combined with previous research by Hamann and others, describes the discovery of the new population of extremely red quasars detected in the Baryon Oscillation Sky Survey (BOSS) of the Sloan Digital Sky Survey (SDSS).

The main goal of this study was to determine the size of the extremely red quasars population and characterize its basic properties compared to the much larger population of quasars in in the BOSS-SDSS survey overall.

The extremely red quasars were selected for study because of their extreme colour, but the analysis by Hamann and his fellow researchers reveal a number of peculiar properties consistent with a unique and possibly young evolutionary stage. In particular, they have an exceptionally high incidence of powerful quasar-driven outflows that could be involved in galaxy-wide blowouts of gas and dust.

Overall, the gaseous environments around the black holes appear to be more extended and more energetic than the environments of normal quasars, which might occur at specific times when young gas-rich host galaxies are dumping prodigious amounts of matter into the central black holes, creating an exotic extreme variety of quasars.

More work is needed now to examine the extremely red quasars population further and understand its relationship to the general phenomenon of quasars and, perhaps, to a particularly violent young phase of quasar-galaxy evolution.