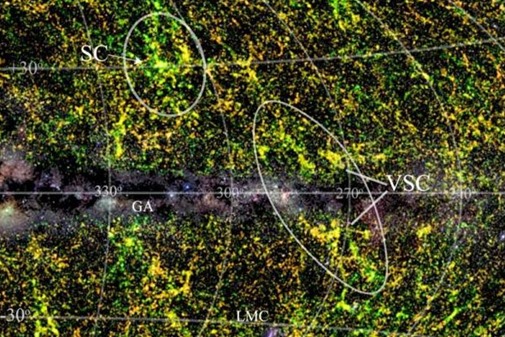 GARCHING, Germany, Nov. 16 (UPI) -- The dust and stars lying in the plane of the Milky Way obscure can hide some of the largest structures in the universe. The recent discovery of the newly named Vela super cluster is proof.

The Vela super cluster -- newly discovered by a team of astrophysicists from South Africa, the Netherlands, Germany and Australia -- covers a larger expanse of sky and may be bigger than Shapley.

The revelation was made possible by a survey of thousands of partially obscured galaxies using the Southern African Large Telescope. Analysis by astronomers revealed eight clusters among the surveyed galaxies. Follow-up observations using Anglo-Australian Telescope showed the eight clusters were related.

Structural organization among galactic objects can be revealed by redshifts, increased wavelength, within the spectroscopic survey.

"I could not believe such a major structure would pop up so prominently," Renée Kraan-Korteweg, a researcher at the University of Cape Town, said in a news release.

Clusters are revealed by a luminous concentration of X-rays. Analysis of X-ray clusters within the newly discovered superstructure suggest Vela is especially dense.

But scientists aren't confident they have the whole picture. Seeing past the obscurities of the Milky Way's dusty disk remains a problem. Scientists suspect Vela itself may be part of an even larger superstructure.

"We already have good indications that the Vela super cluster is embedded in a large network of cosmic filaments traced by clusters, providing insight into the even larger-scale structure embedding the Vela Super cluster," said Gayoung Chon, a researcher at the Max Planck Institute for Extra-terrestrial Physics. "With the future multi-wavelength programme we hope to unveil its full influence on the cosmography and cosmology."