How can we slow down planet migration? 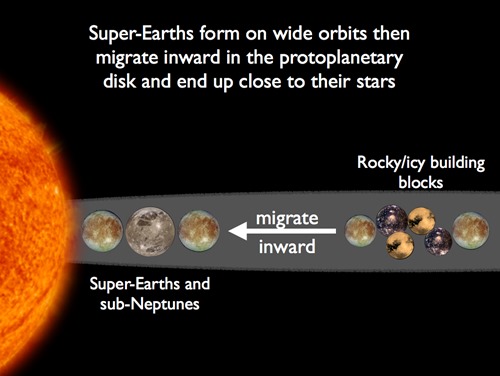 Planets can move – or “migrate” – inward and outward. When a planet forms in a protoplanetary disk, it excites two spiral density waves — places where excess mass collects in the disk. (This movie shows what that looks like!) The inner spiral moves ahead of the planet and speeds it up, increasing the planet’s angular momentum and propelling it outwards. Meanwhile, the outer spiral lags behind the planet and slows it down, stripping the planet of some of its angular momentum and forcing it inwards towards the star.  In the simplest models, the outer wave exerts a torque that is just barely stronger than the inner wave. Although that difference is small, it should be enough to cause a planet to spiral into its star and die long before the disk dissipates in a few million years!

Thankfully, we know from our own solar system and countless exo-solar systems that planets are more than capable of surviving disk migration. This motivates Baillié et al. to ask: What secondary effects in a disk are responsible for preventing planets from migrating too quickly?

An idea: Simple disk models are not enough. Density and temperature are not smooth!

When astronomers create models – whether with pencil and paper (analytic) or with simulations (computational) – we try to incorporate only the simplest, relevant laws of physics that are needed to adequately represent the phenomena that we study. In protoplanetary disk models, most studies assume smooth power-law profiles to describe the density and temperature as they drop off at larger and larger radii. For modelling migration, this is not enough. Previous work has shown that generic bumps and discontinuities in these profiles can slow migration – but only if such features can survive for long periods of time. 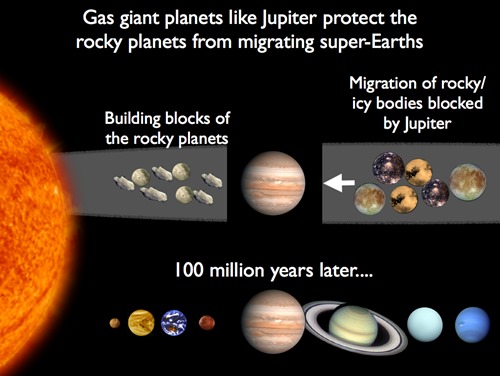 The authors in this study want to further validate that idea by focusing on more realistically modelling the evolution of “bump-causing” features that appear naturally in protoplanetary disks. They focus on two features in particular:

•Planet Traps – narrow annuli where any material just outside of the trap gets pushed towards it, causing a build-up. If a planet migrates into a trap, it will stop migrating and get stuck here. However, if the disk structure changes, the trap will disappear and the planet will continue to migrate (usually inward towards its star).

•The H2O Snow Line – the dividing line between where small rocky planets can or cannot grow into larger gas giants. Beyond this line, water is at a low enough temperature that it can de-sublimate into solid ice grains, greatly increasing the density of solids in this region. With more ice grains and other volatiles, smaller planet cores can accrete more material and grow much more quickly into larger cores. This gives the cores enough time to accrete large amounts of gas from the disk and become gas giants before that gas dissipates away.

No model is perfectly realistic, but the authors feel they can improve on other models by considering not just the disk density, but also the disk composition – something that is often neglected in similar studies. They start with the standard choice of a density profile – the Minimum Mass Solar Nebula (the minimum mass distribution that could make all 8 planets and still have started with the same composition as the Sun). Then, they go an extra step by accounting for the fact that the temperature is set by how well different materials can absorb and transfer heat through the disk (as quantified by their opacities). They use the opacities of the different materials in the disk to construct the initial temperature profile and continue to take these materials into account when simulating how the temperature profile evolves over time.

Results: Snow lines widen into snow regions. Planets can be trapped near this region. 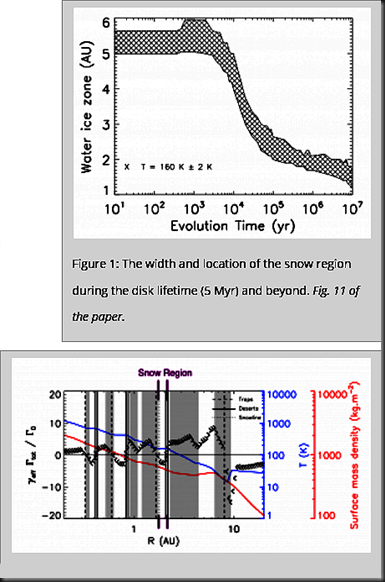 When the authors simulate the disk’s evolution, they find that the temperature flattens into a “plateau” near the water snow line. In a smooth decaying temperature profile, there is only one point in the disk that has the exact temperature at which water de-sublimates – the so-called “snow line.” However, with these plateaus, that point widens into a region sometimes as wide as 1 AU – a “snow region.” If snow lines are actually snow regions, then “walking the line” is not saying much if you are walking a snow line.

Figure 2: The temperature profile flattens at the snow line. It also shows the location of traps where the total torque is pointing outward (right arrow above zero) on the left and pointing inward (left arrow below zero) immediately on the right. There is a trap (dashed line) very close to the H2O snow region (purple lines) near 1.7 AU. Adapted from Fig. 14 of the paper.

The plateau in the temperature profile creates a planet trap near the water snow region. Normally, traps that are not in any special part of the disk dissipate relatively quickly. However, the authors find that the trap associated with the snow region stays with it.

Since there must always be some location in the disk that has the temperature at which water de-sublimates from gas to solid, the snow region always exists somewhere in the disk. Since the snow region is able to survive the lifetime of the disk, the associated planet trap also survives (unlike the other traps in the disk). Therefore, this trap should be able to slow the migration of any planet that it captures.

The authors warn that a planet in the trap might be able to escape when the trap is migrating (which happens at a slower rate than the planet usually migrate). Naturally, they expect the planet to migrate with the trap, but they worry that a real planet might be able to start migrating closer to its usual rate, which would be faster than the trap. The authors hope to investigate if that occurs in a follow-up study. Regardless, the traps make the density and temperature profiles much less smooth throughout the disk – showing that the traps and snow lines are viable mechanisms for slowing down migration.