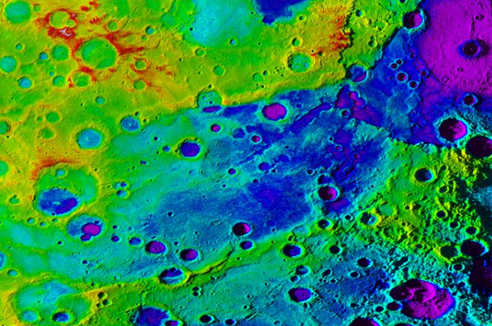 Scientists have long known that Mercury — the innermost planet in our solar system — is shrinking. Astronomers believe that in order to accommodate a cooling and shrinking core, rocks on Mercury’s crust are continuously being pushed together — a geological phenomenon that creates massive scarps and valleys.

Now, researchers have discovered what they say is the first evidence of buckling of the planet’s outer silicate shell in response to this global contraction. In a study published Wednesday in the journal Geophysical Research Letters, the researchers describe a “great valley” that most likely formed as a result of Mercury’s single outer crust plate contracting and bending.

The valley, which extends into the Rembrandt basin — one of the largest and youngest impact basins on Mercury — is about 250 miles wide, 2 miles deep, and over 600 miles long, making it much larger than the Grand Canyon.

“Unlike Earth’s Great Rift Valley in East Africa, Mercury’s Great Valley is not caused by the pulling apart of lithospheric plates due to plate tectonics; it is the result of the global contraction of a shrinking one-plate planet,” lead author Thomas Watters from the Smithsonian National Air and Space Museum in Washington, D.C., said in a statement. “Even though you might expect lithospheric buckling on a one-plate planet that is contracting, it is still a surprise when you find that it’s formed a great valley that includes the largest fault scarp and one of the largest impact basins on Mercury.”

The researchers were — using images captured by NASA’s MESSENGER [MErcury Surface, Space ENvironment, GEochemistry, and Ranging] spacecraft — able to create a high-resolution topographic map of the part of Mercury’s southern hemisphere where the valley is located. They discovered that it is bound by two large scarps — probably created when one side of a geological fault moved vertically with respect to another.

“There are similar examples of this on Earth involving both oceanic and continental plates, but this may be the first evidence of this geological process on Mercury,” Watters said.

MESSENGER was launched in 2004 and began orbiting Mercury in 2011. The spacecraft continued to operate for over three years after completing its primary mission in 2012, capturing, in the process, nearly 300,000 images during its over 4,100 orbits.