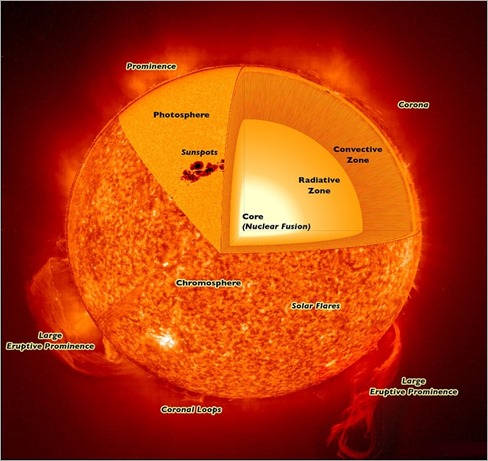 In 2009, applied physicist Peter Sturrock was visiting the National Solar Observatory in Tucson, Arizona, when the deputy director of the observatory told him he should read a controversial article about radioactive decay. Although the subject was outside Sturrock's field, it inspired a thought so intriguing that the next day he phoned the author of the study, Purdue University physicist Ephraim Fischbach, to suggest a collaboration.

Watch Again my program: ‘The Sun in action’ on the left column of this website.

Fischbach replied, "We were about to phone you."

More than seven years later, that collaboration could result in an inexpensive table top device to detect elusive neutrinos more efficiently and inexpensively than is currently possible, and could simplify scientists' ability to study the inner workings of the sun. The work was published in the Nov. 7 issue of Solar Physics.

"If we're correct, it means that neutrinos are far easier to detect than people have thought," said Sturrock, professor emeritus of applied physics. "Everyone thought that it would be necessary to have huge experiments, with thousands of tons of water or other material, that may involve huge consortia and huge expense, and you might get a few thousand counts a year. But we may get similar or even better data from an experiment involving only micrograms of radioactive material."

For twenty years, Sturrock and his colleague Jeff Scargle, astrophysicist and data scientist at NASA Ames Research Center, have studied neutrinos, subatomic particles with no electric charge and nearly zero mass, which can be used to learn about the inside of the sun. 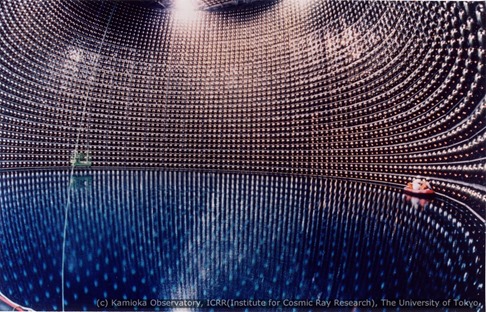 On Earth, an area the size of a fingernail has 65 billion neutrinos pass through it each second. But only one or two in an entire lifetime will actually stop in our bodies. Studying neutrinos involves massive equipment and expenses to trap enough of the elusive particles for investigation.

At present, the gold standard for neutrino detection is Japan's Super-Kamiokande, a magnificent $100 million observatory. In use since 1996, Super-Kamiokande lies 1,000 meters below ground. It consists of a tank filled with 50,000 tons of ultra-pure water, surrounded by about 13,000 photo-multiplier tubes. If a neutrino enters the water and interacts with electrons or nuclei there, it results in a charged particle that moves faster than the speed of light in water. This leads to an optical shock wave, a cone of light called Cherenkov radiation. This light is projected onto the wall of the tank and recorded by the photomultiplier tubes.

The 2002 Nobel Prize in Physics was awarded to Masatoshi Koshiba of Super-Kamiokande and Raymond Davis Jr. of Homes take Neutrino Observatory for the development of neutrino detectors and "for the detection of cosmic neutrinos." One perplexing detail of this work was that, with their ground-breaking detection methods, they were detecting one-third to one-half as many neutrinos as expected, an issue known as the "solar neutrino problem." This shortfall was first thought to be due to experimental problems. But, once it was confirmed by Super-Kamiokande, the deficit was accepted as real.

The year prior to the Nobel, however, scientists announced a solution to the solar neutrino problem. It turned out that neutrinos oscillate among three forms (electron, muon and tau) and detectors were primarily sensitive to only electron neutrinos. For the discovery of these oscillations, the 2015 Nobel Prize in Physics was awarded to Takaaki Kajita of Super-Kamiokande and Arthur B. MacDonald of the Sudbury Neutrino Observatory.

Even with these Nobel Prize-worthy developments in research and equipment at their disposal, scientists can still detect only a few thousand neutrino events each year.

The research that Sturrock learned about in Tucson concerned fluctuations in the rate of decay of radioactive elements. The fluctuations were highly controversial at the time because it had been thought that the decay rate of any radioactive element was constant. Sturrock decided to study these experimental results using analytical techniques that he and Scargle had developed to study neutrinos.

In examining the radioactive decay fluctuations, the team found evidence that those fluctuations matched patterns they had found in Super-Kamiokande neutrino data, each indicating a one-month oscillation attributable to solar rotation. The likely conclusion is that neutrinos from the sun are directly affecting beta-decays. This connection has been theorized by other researchers dating back 25 years, but the Sturrock-Fischbach-Scargle analysis adds the strongest evidence yet. If this relationship holds, a revolution in neutrino research could be underway.

"It means there's another way to study neutrinos that is much simpler and much less expensive than current methods," Sturrock said. "Some data, some information, you won't get from beta-decays, but only from experiments like Super-Kamiokande. However, the study of beta-decay variability indicates there is another way to detect neutrinos, one that gives you a different view of neutrinos and of the sun."

Sturrock said this could mark the beginning of a new field in neutrino research and solar physics. He and Fischbach see the possibility of bench-top detectors that would cost thousands rather than millions of dollars.

The next steps for now will be to gather more and better data and to work toward a theory that can explain how all these physical processes are connected.