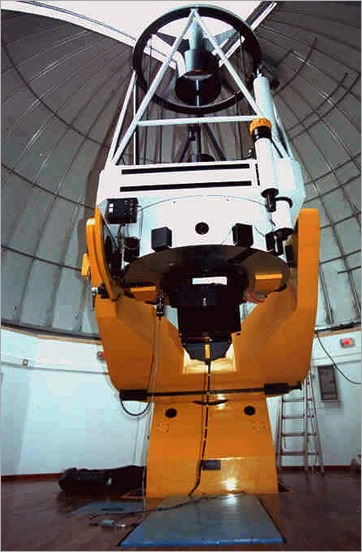 India's unique research project focused around the study of universe, formation of stars, galaxies and interstellar dust got a big boost recently, owing to the financial aid extended by software giant Infosys and three international institutions.

Left: Robopol designed and built by ICUAA and installed at Greece observatory Skinakas since 2013. The 1.3m telescope was commissioned in 1995 and is the principal observing facility of Skinakas Observatory. It is a modified Ritchey–Chrétien telescope, that is it has a hyperbolic primary and a hyperbolic secondary mirror, in order to provide a large field of view with high image quality. The mirrors were built by Carl Zeiss Oberkochen. The telescope mount is equatorial, computer controlled and was constructed by DFM Engineering. There is also an auto guider with off axis guiding system, which was built by Baader Planetarium.

The IUCAA has also received over US$ 3 million from the National Science Foundation of USA, the Stavros Niarchos Foundation of Greece and the National Research Foundation of South Africa for the same project. This is a big boost for the institute which is getting popular for designing/building world-class instruments aimed at astronomical research.

The IUCAA is an autonomous institution set up by the University Grants Commission (UGC) of India to promote the nucleation and growth of active groups in astronomy and astrophysics at Indian universities. The instrumentation laboratory at IUCAA is involved in a variety of R&D activities in astronomy.

Two WALOP instruments (1meter long and 0.5 m high and 0.5 wide) are fully indigenous, will be built in Pune and are expected to be ready by 2018. They will be placed at the ground-based observatories in Greece and South Africa.

"With the instrument, we will be able to showcase our unique capability and innovation in order to gain the confidence of the international community in a competitive market of interstellar research," says Prof Somak Raychaudhury, Director of IUCAA.

The IUCAA scientists headed by Prof AN Ramaprakash had earlier prepared a smaller version in 2013, which is currently installed in the Greece.

The instrument uses relative photometry and the polarimetric mapping of large regions in the sky. This will help monitor the polarization of light and map the magnetic field in interstellar clouds and dusts which is expected to reveal much clearer picture about age of galaxies.

Professor Ramaprakash told dna, "The WALOP will be able measure the polarization caused by various kinds of interstellar dusts, magnetic fields of galaxies and tiny microwave radiations emitted by them at the time of big bang. This will give us insight about Milky Way, sun and other stars with much more accuracy and clarity than other instruments in the world can do now."

Instruments and systems designed and built in the centre are being used in many facilities in India and abroad such as the IGO, 11m Southern African Large Telescope (SALT), 10.4m Gran Telescopio Canarias at La Palma, Spain, Palomar 60 inch telescope, Skinakas 1.3m telescope etc..