Astronomers study star that spins slower on the inside 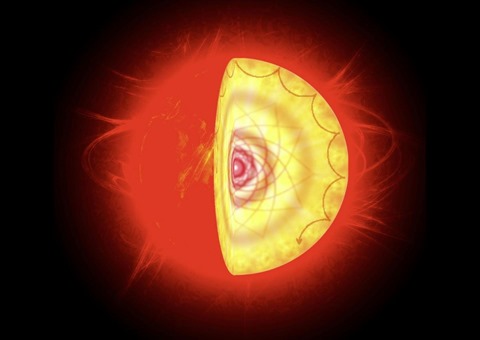 Don Kurtz and his colleagues used a technique known as asteroseismology to “look inside” the star KIC 11145123. Asteroseismology measures sound waves bouncing around inside stars and can be used to study stellar interiors, in the same way that waves produced by earthquakes can build up a picture of the inside of the Earth.

Of course, sound can’t travel through the vacuum of space, but these waves create a visible effect on the star that can be measured. The waves cause the star to pulsate in and out, and this is seen as a variation in the amount of light received from the star. NASA’s Kepler mission, while mainly tasked with finding exoplanets, also revolutionised asteroseismology by measuring pulsations in thousands of stars.

A Kepler light curve will show regular variations in light due a pulsation, and this is seen as a wave that oscillates up and down. Asteroseismology studies the frequencies of the sound waves, which essentially counts how many times the star has pulsated in and out in a day. Each wave corresponds to a different frequency, and many different frequencies are seen in the Kepler data. If a star is rotating, then instead of a single peak, the frequency will be split into multiple components.

Using this frequency splitting to tell how fast a star is rotating is notoriously difficult and it is typically only done for the sound waves that probe the outer layers of a star. In a main sequence star like our Sun, it is currently impossible to detect any waves from the deep interior, let alone measure how they are split.

KIC 11145123 is about 2000 Kelvin hotter than our Sun, and is also slightly more massive. The higher temperature and mass of this star cause the sound waves to travel in a different manner compared to those in the Sun, so that waves ricocheting in the interior can be detected. Kurtz’s team were able to measure the frequency splitting of the waves near the surface as well as deep within the star, and published their results in the October issue of the journal MNRAS. 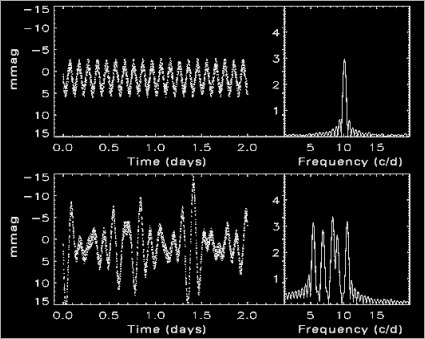 Not only did their analysis reveal that the star is spinning slower on the inside, they also showed that it has a 100 day rotation period, which is unusually slow for this type of star. However, it is this slow rotation rate that allowed for the clear detection of the rotation in the core.

If the star was spinning faster, the frequencies would get jumbled up, making it very tedious work to measure the splitting. By understanding the slower rotating star first, it will enable astronomers to eventually measure the core rotation for stars spinning at a more dizzying rate.

Measuring the difference in rotation speed between the interior and exterior of a star reveals much sought after information on how stars are structured and how they evolve. Asteroseismology has already been used to measure the internal rotation rates of red giant and white dwarf stars, but as stars spend 90 per cent of their lifetimes on the main sequence, the discovery of core rotation in KIC 11145123 will initiate a whole new level of our understanding of stars.