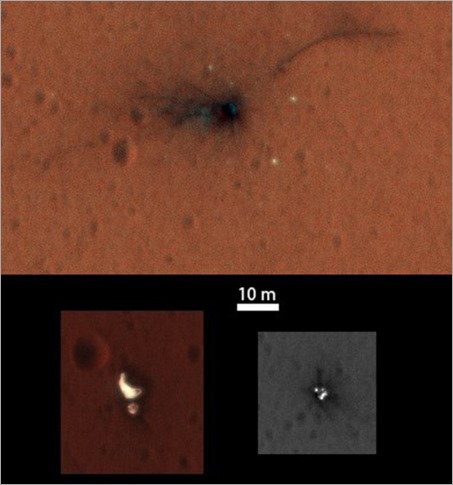 These cut-outs from the observation cover three locations where parts of the spacecraft reached the ground: the lander module itself in the upper portion, the parachute and back shell at lower left, and the heat shield at lower right. The heat shield location was outside of the area covered in colour. The scale bar of 10 meters (32.8 feet) applies to all three cut-outs.

Schiaparelli was one component of the European Space Agency's ExoMars 2016 project, which placed the Trace Gas Orbiter into orbit around Mars on the same arrival date. The ExoMars project received data from Schiaparelli during its descent through the atmosphere. ESA reports that the heat shield separated as planned, the parachute deployed as planned but was released (with back shell) prematurely, and the lander hit the ground at a velocity of more than 180 miles per hour (more than 300 kilometres per hour).

Watch again my program from April 2016

Where the lander module struck the ground, dark radial patterns that extend from a dark spot are interpreted as "ejecta," or material thrown outward from the impact, which may have excavated a shallow crater. From the earlier image, it was not clear whether the relatively bright pixels and clusters of pixels scattered around the lander module's impact site are fragments of the module or image noise. Now it is clear that at least the four brightest spots near the impact are not noise. These bright spots are in the same location in the two images and have a white colour, unusual for this region of Mars. The module may have broken up at impact, and some fragments might have been thrown outward like impact ejecta. 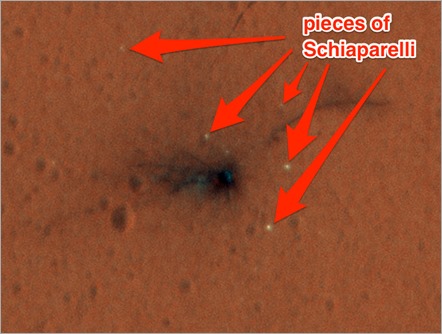 The parachute has a different shape in the Nov. 1 image than in the Oct. 25 one, apparently from shifting in the wind. At lower right are several bright features surrounded by dark radial impact patterns, located where the heat shield was expected to impact. The bright spots appear identical in the Nov. 1 and Oct. 25 images, which were taken from different angles, so these spots are now interpreted as bright material, such as insulation layers, not glinting reflections.

Had Schiaparelli landed, it would have been the ESA's first spacecraft to safely reach the surface of the red planet.

Unfortunately, these images mean the probe has joined a growing  graveyard of failed Martian spacecraft.

For Russia, which collaborated with the ESA on the mission, Schiaparelli is the nation's seventh failed Mars landing — though it put two satellites into Mars' orbit while it was still the Soviet Union. 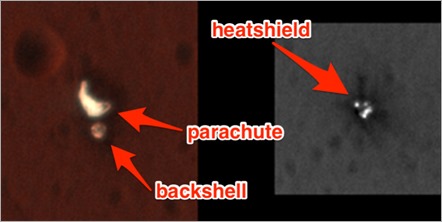 Fortunately, Schiaparelli is just one-half of the  ExoMars 2016 mission; the other half is Schiaparelli's mother ship, the Trace Gas Orbiter. The ESA said the orbiter safely entered into Mars orbit, which means its task of sniffing for methane on Mars — a potential sign of microbial life — can begin.

The lander's mission was designed as a precursor to a more ambitious rover mission planned for 2020, so it's more of an engineering proof-of-concept than a science mission. Still, the mission failed, and officials were quick to downplay the loss.

"We should remember this landing was a test," Ferri said on October 20. "And as part of the test, you want to learn what happened," no matter the outcome.

Before Schiaparelli, humanity tried 18 times to touch Mars with penetrators, landers, and wheeled rovers. Only eight missions have succeeded.

The last time the ESA tried to land a probe on Mars, in 2003, it failed. Its Beagle 2 lander successfully jettisoned from an orbiting spacecraft. Aside a final signal before its descent, however, the robot never contacted Earth again.

It wasn't until January 2015 — more than a decade later — that NASA's MRO found and photographed the dead rover in a satellite image. A subsequent investigation found that its solar panels had failed to deploy, so it never mustered the energy to phone home.

Had the new Schiaparelli probe survived, it would have also taken pictures of its descent and attempted to measure Mars' electric field for the first time and  make other limited scientific observations.