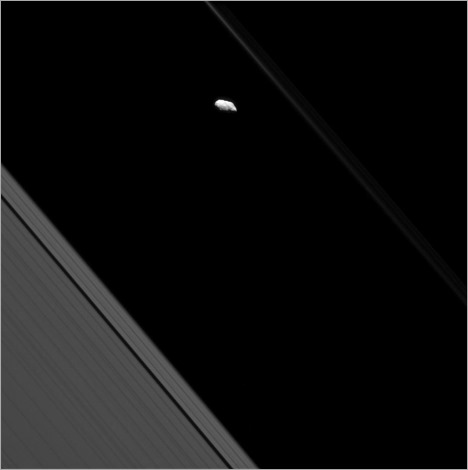 Prometheus is an inner satellite of Saturn. It was discovered in 1980 (some time before October 25) from photos taken by the Voyager 1 probe, and was provisionally designated S/1980 S 27. In late 1985 it was officially named after Prometheus, a Titan in Greek mythology 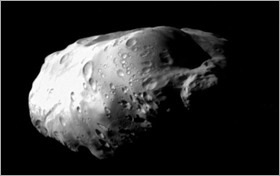 Surface features are visible on Saturn's moon Prometheus in this view from NASA's Cassini spacecraft. Most of Cassini's images of Prometheus are too distant to resolve individual craters, making views like this a rare treat.

Saturn's narrow F ring, which makes a diagonal line beginning at top centre, appears bright and bold in some Cassini views, but not here. Since the sun is nearly behind Cassini in this image, most of the light hitting the F ring is being scattered away from the camera, making it appear dim. Light-scattering behaviour like this is typical of rings comprised of small particles, such as the F ring.

This view looks toward the unilluminated side of the rings from about 14 degrees below the ring plane. The image was taken in visible light with the Cassini spacecraft narrow-angle camera on Sept. 24, 2016.

The view was acquired at a distance of approximately 226,000 miles (364,000 kilometres) from Prometheus and at a sun-Prometheus-spacecraft, or phase, angle of 51 degrees. Image scale is 1.2 miles (2 kilometres) per pixel.