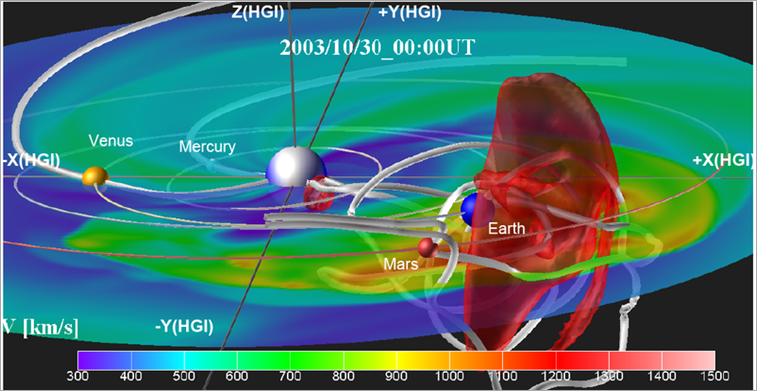 The collected data, reported this month by astrophysicists and highlighted by Wired, indicated that a giant cloud of fast-moving plasma from the Sun struck the Earth’s magnetic field (or ‘magnetosphere’) shrunk from 11 times the Earth’s radius to just four for the two hour period.

The magnetosphere is the region of space surrounding an astronomical object (in this case, our planet) where charged particles are controlled by that object's magnetic field. To give an idea of the strength of the field, NASA scientists have suggested the Earth's magneto tail may cause "dust storms" on the Moon. The storms are created through the potential magnetic difference between the day side and the night side of the moon.

The review of the 2015 event suggests a solar storm of such intensity passed Earth’s magnetosphere (which provides a natural defence against cosmic radiation). The impact of this storm was to hit technology in several regions of the Northern hemisphere through electromagnetic pulses. A solar storm (or solar flare) is a sudden flash of brightness observed near the Sun's surface. It involves a very broad spectrum of energy emissions.

Scientists, Laboratory Roots reports, are concerned the event has put a permanent dent in the Earth’s magnetic field. This is concerning should further events of this magnitude occur in the future, since the magnetic field is our main protection against solar radiation. This doesn’t mean immediate harm to life but such events could further damage electrical equipment and there is a risk, in some areas, of increased skin cancer. And this is all dependent upon future solar storms of a similar magnitude.

The research indicates humanity must be mindful of our magnetic field and the role it plays. However, there isn’t much we can do to protect the planet other than continue to monitor.

The event has been described in the journal Physical Review Letters. The paper is titled “Transient Weakening of Earth’s Magnetic Shield Probed by a Cosmic Ray Burst.”

The GRAPES-3 tracking muon telescope in Ooty, India measures muon intensity at high cutoff rigidities (15–24 GV) along nine independent directions covering 2.3 sr. The arrival of a coronal mass ejection on 22 June 2015 18:40 UT had triggered a severe G4-class geomagnetic storm (storm). Starting 19:00 UT, the GRAPES-3 muon telescope recorded a 2 h high-energy (   ) burst of galactic cosmic rays (GCRs) that was strongly correlated with a 40 nT surge in the interplanetary magnetic field (IMF). Simulations have shown that a large ( ) compression of the IMF to 680 nT, followed by reconnection with the geomagnetic field (GMF) leading to lower cutoff rigidities could generate this burst. Here, 680 nT represents a short-term change in GMF around Earth, averaged over 7 times its volume. The GCRs, due to lowering of cutoff rigidities, were deflected from Earth’s day side by   in longitude, offering a natural explanation of its night-time detection by the GRAPES-3. The simultaneous occurrence of the burst in all nine directions suggests its origin close to Earth. It also indicates a transient weakening of Earth’s magnetic shield, and may hold clues for a better understanding of future superstorms that could cripple modern technological infrastructure on Earth, and endanger the lives of the astronauts in space.