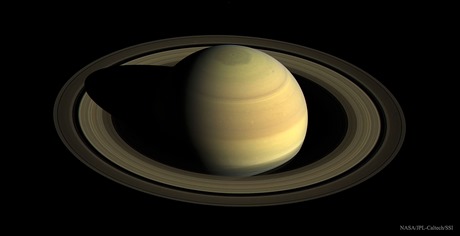 A team of researchers has presented a new model for the origin of Saturn's rings based on results of computer simulations. The results of the simulations are also applicable to rings of other giant planets and explain the compositional differences between the rings of Saturn and Uranus. The findings were published on October 6 in the online version of Icarus.

The giant planets in our solar system have very diverse rings. Observations show that Saturn's rings are made of more than 95% icy particles, while the rings of Uranus and Neptune are darker and may have higher rock content. Since the rings of Saturn were first observed in the 17th century, investigation of the rings has expanded from earth-based telescopes to spacecraft such as Voyagers and Cassini. However, the origin of the rings was still unclear and the mechanisms that lead to the diverse ring systems were unknown.

The present study focused on the period called the Late Heavy Bombardment that is believed to have occurred 4 billion years ago in our solar system, when the giant planets underwent orbital migration. It is thought that several thousand Pluto-sized (one fifth of Earth's size) objects from the Kuiper belt existed in the outer solar system beyond Neptune. First the researchers calculated the probability that these large objects passed close enough to the giant planets to be destroyed by their tidal force during the Late Heavy Bombardment. Results showed that Saturn, Uranus and Neptune experienced close encounters with these large celestial objects multiple times.

Next the group used computer simulations to investigate disruption of these Kuiper belt objects by tidal force when they passed the vicinity of the giant planets. The results of the simulations varied depending on the initial conditions, such as the rotation of the passing objects and their minimum approach distance to the planet. However they discovered that in many cases fragments comprising 0.1-10% of the initial mass of the passing objects were captured into orbits around the planet. The combined mass of these captured fragments was found to be sufficient to explain the mass of the current rings around Saturn and Uranus. In other words, these planetary rings were formed when sufficiently large objects passed very close to giants and were destroyed.

The researchers also simulated the long-term evolution of the captured fragments using supercomputers at the National Astronomical Observatory of Japan. From these simulations they found that captured fragments with an initial size of several kilometres are expected to undergo high-speed collisions repeatedly and are gradually shattered into small pieces. Such collisions between fragments are also expected to circularize their orbits and lead to the formation of the rings observed today.

This model can also explain the compositional difference between the rings of Saturn and Uranus. Compared to Saturn, Uranus (and also Neptune) has higher density (the mean density of Uranus is 1.27g cm-3, and 1.64g cm-3 for Neptune, while that of Saturn is 0.69g cm-3). This means that in the cases of Uranus (and Neptune), objects can pass within close vicinity of the planet, where they experience extremely strong tidal forces. (Saturn has a lower density and a large diameter-to-mass ratio, so if objects pass very close they will collide with the planet itself). As a result, if Kuiper belt objects have layered structures such as a rocky core with an icy mantle and pass within close vicinity of Uranus or Neptune, in addition to the icy mantle, even the rocky core will be destroyed and captured, forming rings that include rocky composition. However if they pass by Saturn, only the icy mantle will be destroyed, forming icy rings. This explains the different ring compositions.

These findings illustrate that the rings of giant planets are natural by-products of the formation process of the planets in our solar system. This implies that giant planets discovered around other stars likely have rings formed by a similar process. Discovery of a ring system around an exoplanet has been recently reported, and further discoveries of rings and satellites around exoplanets will advance our understanding of their origin.