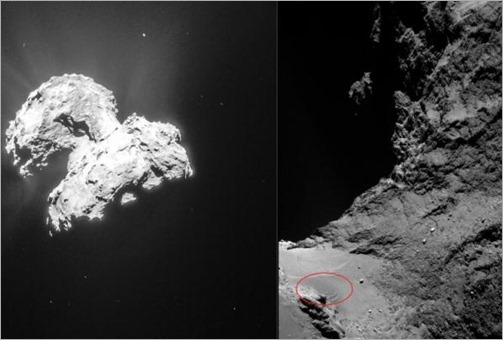 Researchers in France have explained the large dune-like patterns found on the surface of comet 67P/Churyumov-Gerasimenko.

Images collected by the now-retired Rosetta probe and its OIRIS camera revealed the presence of dune-like patterns on the comet's two lobes and the neck connecting them. Images of the same location, photographed at different times, showed the dunes are on the move.

Now, new research suggests temperature and pressure differences between the sunlit and shadowed sides of the comet are significant enough to drive dune-forming winds.

Comet 67P doesn't have a thick, stable atmosphere like Earth. It's atmosphere is thin and tenuous, formed by gases sublimated as the comet gets closer to the sun. Researchers at the French National Center for Scientific Research and the Laboratory of Physics and Mechanics of Heterogeneous Environments at the University of Paris determined pressure gradients on the comet are stark enough to power winds along 67P's surface. Because the comet's gravity is extremely weak, its tiny grains are much easier to transport.

Researchers published their analysis in the journal PNAS.

"Our understanding of the coupling between hydrodynamics and sediment transport is able to account for bed form emergence in extreme conditions and provides a reliable tool to predict the erosion and accretion processes controlling the evolution of small solar system bodies," researchers wrote in their paper.