Official naming of surface features on Pluto and its satellites: First step approved by the I.A.U. 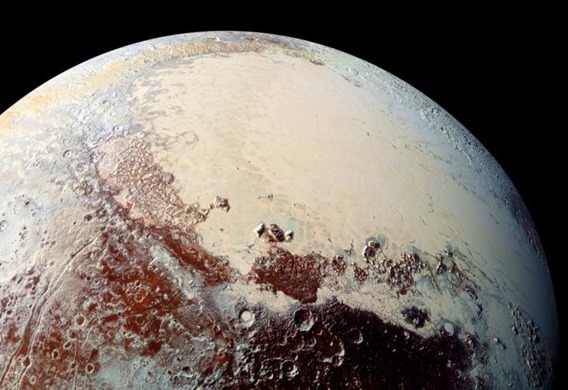 This high-resolution image was captured by NASA's New Horizons spacecraft on its Pluto flyby in 2015, combining blue, red, and infrared images taken by the Ralph/Multispectral Visual Imaging Camera (MVIC). The bright region in the west is part of Pluto's 'heart', and is rich in nitrogen, carbon monoxide, and methane ices.

In 2015, in partnership with NASA's New Horizons mission and the SETI Institute, the International Astronomical Union (IAU) endorsed the Our Pluto naming campaign, which allowed the public to participate in the exploration of Pluto by proposing names for surface features on Pluto and its satellites that were still awaiting discovery. Each of the system's six worlds was designated a set of naming themes set out by the IAU's Working Group for Planetary System Nomenclature. The public responded with overwhelming enthusiasm, suggesting and voting on thousands of names within these categories, as well as proposing names not fitting the approved set of themes.

Working with the New Horizons team, the IAU has agreed to revised naming themes (listed below) for Pluto, and its largest moon, Charon. For its four smaller moons -- Styx, Nix, Kerberos, and Hydra -- the themes remain unchanged. Some of these themes build on the connection between the Roman god Pluto and the mythology of the underworld. Other themes celebrate the human spirit of exploration.

Nix:
•Deities of the night.

Using the revised themes, the New Horizons team will now propose names for the surface features to the IAU, as the body responsible for the official naming of celestial bodies and their surface features. The IAU's Working Group for Planetary System Nomenclature will then decide on the formal names.

"I'm very happy with both the process and partnership that New Horizons and the IAU undertook that led to wonderful, inspiring, and engaging naming themes for surface features on Pluto and its moons," said Alan Stern, New Horizons principal investigator from Southwest Research Institute, Boulder, Colorado. "We look forward to the next step -- submitting actual feature names for approval."

Rita Schulz, Chair of IAU's WGPSN said "I am very pleased that the close collaboration of the WGPSN with the New Horizons Team led to these beautiful, inspirational categories for naming the features on Pluto and its satellites. We are ready now for receiving the proposals for names. Good things take time, but it will be worth it."