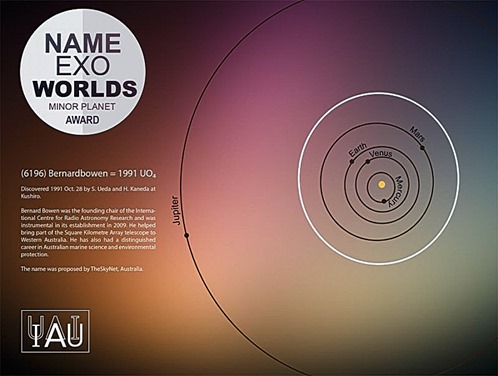 A minor planet in the Solar System will officially be known as Bernard Bowen from today after Australian citizen science project the Skynet won a competition to name the celestial body.

The minor planet was named by the International Centre for Radio Astronomy Research (ICRAR) in honour of their founding chairman Dr Bernard Bowen.

Bernard Bowen sits in the asteroid belt between Mars and Jupiter and takes 3.26 Earth years to orbit the Sun.

Based at ICRAR, the Skynet has been running since 2011 and sees citizen scientists donating their spare computing power to help Australian astronomers uncover the mysteries of the Universe.

Project founders ICRAR also won the right to name a minor planet within our Solar System.

Bernard Bowen was one of 17 minor planets to be christened today.

Other newly named minor planets include Kagura, after a traditional Shinto theatrical dance, and Mehdia, which is equivalent to the Arabic word for gift.

Dr Bowen has presided over scientific advances ranging from the oceans to the skies. He was instrumental in the establishment of ICRAR in 2009, and helped bring part of the Square Kilometre Array telescope to Western Australia.

A full list of the citation of the minor planets can be found at the IAU Minor Planet Circular. http://bit.ly/2lGgktg

Bernard Bowen on the Minor Planet Centre site, including an interactive showing its position in the Solar System. http://bit.ly/2kYXs72