Sun's own light may be slowing its surface spin 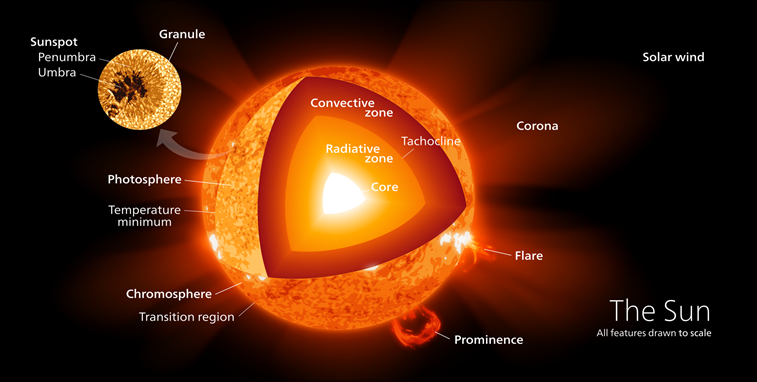 More than 20 years since mystified solar physicists saw the surface of the sun spinning slower than its insides, we might finally have an answer to why this is the case.

Reporting in Physical Review Letters, a team of American and Brazilian astronomers suggests light generated in the sun's core might be applying the brakes on the outer layers.

The braking effect is a reminder that even the teeniest forces can have monumental consequences over time. If verified, the effect could feed into our models of how the sun works, vital for predicting climate here on Earth.

Way back in 1619, German astronomer Johannes Kepler was the first to guess that light can “push” on matter. He noticed the tail of comets always pointed away from the sun and reasoned that sunlight must be the cause.

As we now know, the comet tail effect is mostly due to the “solar wind” of charged particles streaming from the sun rather than the light itself. But Kepler was right in his guess that light can exert a pressure of its own.

This push of light comes from the tiny momentum carried by photons. NASA and others have designed special sails to catch the light and propel spacecraft through the solar system.

Meanwhile, the Breakthrough Starshot project plans to use light to shove tiny spacecraft at near light speed to the nearest stars.

You can imagine the stream of photons coming from the sun as creating a kind of gentle breeze of light. In 1903, English physicist John Henry Poynting realised that sunlight might have a braking effect on orbiting objects, a bit like the drag you feel when cycling in a crosswind.

He realised the extra drag could cause some tiny objects, such as particles of dust, to slow down and spiral into the sun.

the 70-kilometre skin at the surface travelled slowest, spinning about 5% slower than the layer just beneath

Now, astronomers propose, the same drag effect is enough to slow the rotation of the sun itself – or, at least, its surface.

We’ve known that the sun rotates since 1600 when Galileo Galilei used his telescope to track sunspots. In the 1990s, astronomers used information from seismic waves (sun quakes) to probe rotation speed at different depths and found it slowed abruptly near the surface. 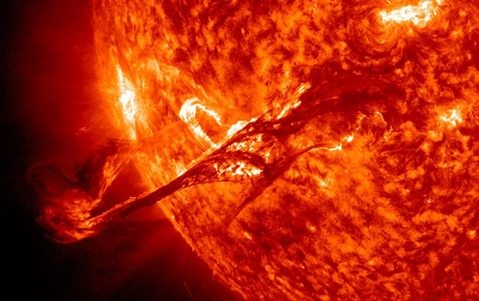 To figure out why, Ian Cunnyngham from the University of Hawaii and colleagues spent three and a half years peering under the sun’s skin.

The part of the sun we can see – the glowing yellow ball – is called the photosphere. It’s a few hundred kilometres thick, made of hydrogen and helium plasma more than 5,000 °C, but is only around a 1,000th the density of our atmosphere at sea level.

Using light filters that showed up the photosphere at different depths – owing to their different temperatures – Cunnyngham and his crew revealed the slowdown at the surface in unprecedented detail.

They were able to see that the 70-kilometre skin at the surface travelled slowest, spinning about 5% slower than the layer just beneath.

To explain the slowdown, Kuhn’s team turned to a modern form of Poynting’s century-old idea. Using their model, the team calculated what effect photons generated in the sun’s core might have on the sun’s rotation.

The aggregated effect over the sun’s five-billion-year lifetime ended up surprisingly close to the actual slowdown seen, an indication they could be on the right track.

And the effect would be strongest in the outer layer, as deeper regions of the star are too dense for photon braking to have any effect. That explains why only the surface of the sun is slowed in its rotation.

Jørgen Christensen-Dalsgaard, an astronomer at the Aarhus University in Denmark who was not involved in the study, said in an interview with the American Physical Society that the model is “speculative” but “not unreasonable”. For him, the real innovation is the imaging technique itself, which resolved the variation of spin with depth in such detail.

“This is undoubtedly an important contribution to our understanding of the dynamics of the sun.”