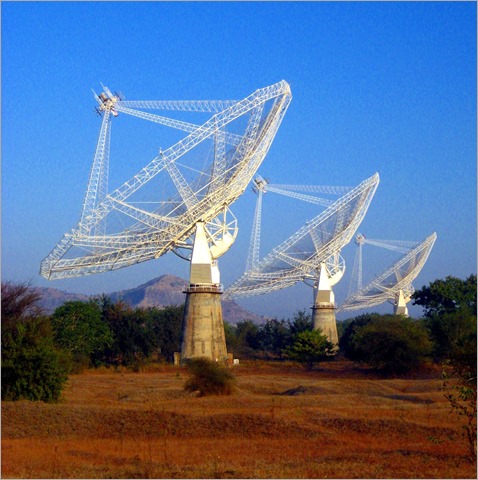 The fully upgraded system of the Giant Metre wave Radio Telescope (GMRT), one of the largest telescopes in the world located near Pune, will be powerful enough to detect fainter objects in the universe that are yet to be observed, said Yashwant Gupta, dean, GMRT Observatory and senior professor, National Centre for Radio Astrophysics, on Sunday.

Speaking on the side-lines of the Science at the Sabha, organised by the Institute of Mathematical Sciences in the city, he said the up gradation of the GMRT by the end of this year will see its sensitivity increased threefold enabling astronomers to observe more objects and phenomena in the universe. "We are upgrading it to see over a much larger range of frequencies at any given time. It means we can get more data and see more details of the universe," he said.

Built in 1995, the GMRT is an array of 30 telescopes that observes radiation coming in from space with a wavelength in the order of radio frequencies. The resolution with which objects can be observed depends on the size of the telescope's antenna. "We are replacing the entire electronics of the antennas from the top all the way down to the end where the data is collected through receivers and analysed," he said.

The GMRT, which is used by astronomers in India and abroad, can study distant galaxies, black holes, high energy objects and events happening billions of light years away. "The upgrade is largely being carried out in India by experts who have gathered knowledge over the years. We are installing, testing and validating the systems." With GMRT, India has found new, highly magnetized, rapidly rotating neutron stars and identified new galaxies and their properties.

On the recent detection of seven earth-sized planets orbiting a star by NASA telescopes, Gupta said more such planets that are habitable would be found. "There are millions of stars like the sun in the galaxy and a solar system is expected to develop around each of them. With powerful transmitters and receivers, we may be able to establish communication with these planets," he said.