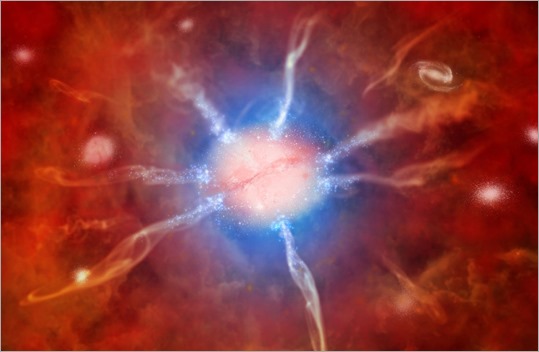 The Phoenix cluster is an enormous accumulation of about 1,000 galaxies, located 5.7 billion light years from Earth. At its centre lies a massive galaxy, which appears to be spitting out stars at a rate of about 1,000 per year. Most other galaxies in the universe are far less productive, squeaking out just a few stars each year, and scientists have wondered what has fuelled the Phoenix cluster’s extreme stellar output.

Now scientists from MIT, the University of Cambridge, and elsewhere may have an answer. In a paper published today in the Astrophysical Journal, the team reports observing jets of hot, 10-million-degree gas blasting out from the central galaxy’s black hole and blowing large bubbles out into the surrounding plasma.

These jets normally act to quench star formation by blowing away cold gas — the main fuel that a galaxy consumes to generate stars. However, the researchers found that the hot jets and bubbles emanating from the centre of the Phoenix cluster may also have the opposite effect of producing cold gas, that in turn rains back onto the galaxy, fuelling further starbursts. This suggests that the black hole has found a way to recycle some of its hot gas as cold, star-making fuel.

“We have thought the role of black hole jets and bubbles was to regulate star formation and to keep cooling from happening,” says Michael McDonald, assistant professor of physics in MIT’s Kavli Institute for Astrophysics and Space Research. “We kind of thought they were one-trick ponies, but now we see they can actually help cooling, and it’s not such a cut-and-dried picture.”

The new findings help to explain the Phoenix cluster’s exceptional star-producing power. They may also provide new insight into how supermassive black holes and their host galaxies mutually grow and evolve. 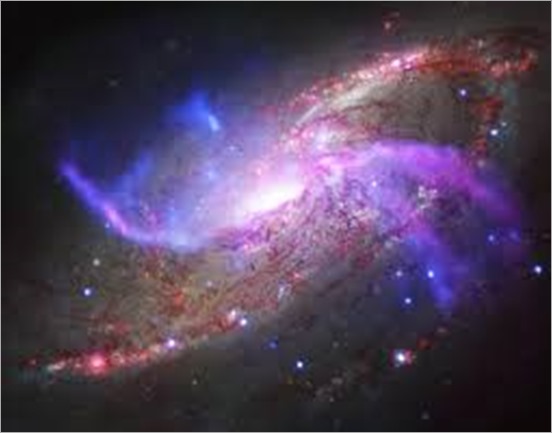 The team analysed observations of the Phoenix cluster gathered by the Atacama Large Millimeter Array (ALMA), a collection of 66 large radio telescopes spread over the desert of northern Chile. In 2015, the group obtained permission to direct the telescopes at the Phoenix cluster to measure its radio emissions and to detect and map signs of cold gas.

The researchers looked through the data for signals of carbon monoxide, a gas that is present wherever there is cold hydrogen gas. They then converted the carbon monoxide emissions to hydrogen gas, to generate a map of cold gas near the centre of the Phoenix cluster. The resulting picture was a puzzling surprise.

“You would expect to see a knot of cold gas at the centre, where star formation happens,” McDonald says. “But we saw these giant filaments of cold gas that extend 20,000 light years from the central black hole, beyond the central galaxy itself. It’s kind of beautiful to see.”

The team had previously used NASA’s Chandra X-Ray Observatory to map the cluster’s hot gas. These observations produced a picture in which powerful jets flew out from the black hole at close to the speed of light. Further out, the researchers saw that the jets inflated giant bubbles in the hot gas.

When the team superimposed its picture of the Phoenix cluster’s cold gas onto the map of hot gas, they found a “perfect spatial correspondence”: The long filaments of frigid, 10-kelvins gas appeared to be draped over the bubbles of hot gas.

“This may be the best picture we have of black holes influencing the cold gas,” McDonald says. 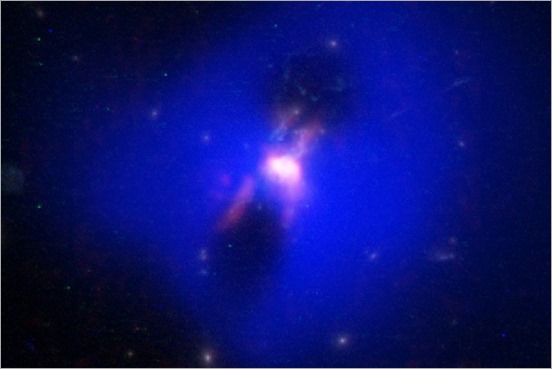 What the researchers believe to be happening is that, as jet inflate bubbles of hot, 10-million-degree gas near the black hole, they drag behind them a wake of slightly cooler, 1-million-degree gas. The bubbles eventually detach from the jets and float further out into the galaxy cluster, where each bubble’s trail of gas cools, forming long filaments of extremely cold gas that condense and rain back onto the black hole as fuel for star formation.

“It’s a very new idea that the bubbles and jets can actually influence the distribution of cold gas in any way,” McDonald says.

Scientists have estimated that there is enough cold gas near the centre of the Phoenix cluster to keep producing stars at a high rate for another 30 to 40 million years. Now that the researchers have identified a new feedback mechanism that may supply the black hole with even more cold gas, the cluster’s stellar output may continue for much longer.

“As long as there’s cold gas feeding it, the black hole will keep burping out these jets,” McDonald says. “But now we’ve found that these jets are making more food, or cold gas. So you’re in this cycle that, in theory, could go on for a very long time.”

He suspects the reason the black hole is able to generate fuel for itself might have something to do with its size. If the black hole is relatively small, it may produce jets that are too weak to completely blast cold gas away from the cluster.

“Right now [the black hole] may be pretty small, and it’d be like putting a civilian in the ring with Mike Tyson,” McDonald says. “It’s just not up to the task of blowing this cold gas far enough away that it would never come back.”

The team is hoping to determine the mass of the black hole, as well as identify other, similarly extreme star makers in the universe.