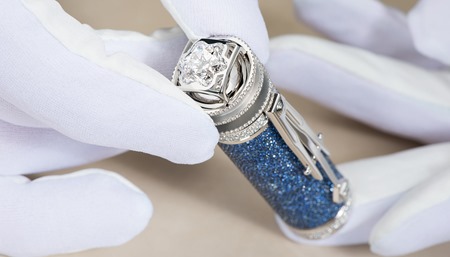 Montblanc's Maison Artisan Atelier in Hamburg, Germany, has been hitting it out of the park lately with over-the top writing instrument designs (with prices sometimes exceeding $1 million) bearing intricate motifs cantered around serpents and notable figures like Marco Polo, but its newest collection is truly out of this world. Honouring mathematician, astronomer, and astrology Johannes Kepler—perhaps best recognized for his contribution of the three laws of planetary motion—the High Artistry Homage to Johannes Kepler Limited Edition collection comprises three limited edition designs and one unique piece with an astronomical seven-figure price tag.

A testament to the collection's exclusivity, even its base model, the Johannes Kepler High Pede Serpentari Limited Edition 39 ($48,130), is restricted to just 39 examples worldwide. The white gold pen sports a blue lacquer cap and barrel decorated with three-dimensional engraving of the Ophiuchus and Sagittarius constellations based on an illustration appearing in Kepler's ground-breaking book De Stella Nova in Pede Serpentarii, which detailed his observations pertaining to the supernova of 1604. Further astronomical allusions include the pen's telescope-like silhouette, three rings on the cap (one of which is set with pave diamonds) representing the scientist's three laws of planetary motion, and a coloured opal on the cap's top representing a supernova. The Johannes Kepler High Artistry Astronomia Nova Limited Edition 9 ($140,000), as its name suggests, is limited to nine pieces and also presents a representation of Ophiuchus and Sagittarius on its barrel, although it is rendered in a skeletonized white-gold overlay dotted with diamonds symbolizing stars and coloured gemstones standing in for planets. 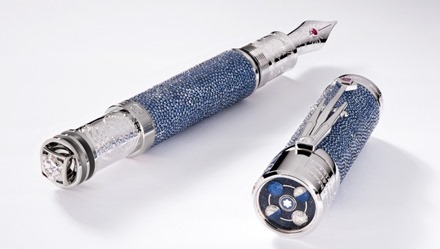 Tapping the extensive horological resources of its watch manufacture in Villaret, Switzerland, Montblanc added a mechanical complication to the Johannes Kepler High Artistry Somnium Limited Edition 5 ($513,000 to $556,000, depending on colour choice) in the form of a fully functional moon-phase indicator on the cap. The display consists of two moving parts: a central Montblanc logo, whose rotation signals that the movement is operating, and the aventurine and white gold moon phase disk itself. Providing power to the mechanical marvel is a special reminder housed within the pen's wooden display box.

The shining star of the collection is the Stella Nova Limited Edition 1 ($1.5 million), a one-of-a-kind piece bedecked in 570 diamonds and 5,294 sapphires arranged to evoke the Milky Way in the night sky. Crowning the achievement is a 6.2-carat Montblanc-cut diamond that rests on the pen's cap and is surrounded by three diamond-set rings representing, once again, Kepler's three laws. To ensure that your look is as unified as Kepler's theories, the pen is accompanied by a pair of cufflinks shaped like the scientist's model of the solar system.

All four designs in the High Artistry Homage to Johannes Kepler Limited Edition collection will be available exclusively at select Montblanc boutiques starting in April, (montblanc.com)