Astronomers Planning To Map Family Tree Of Stars In The Galaxy 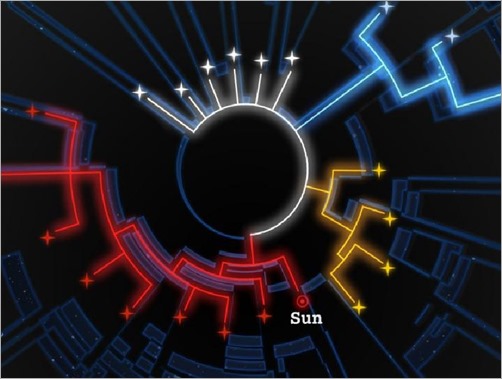 A study is being conducted in a bid to find out the ancestry of stars and map their family tree. Researchers are using principles from biology and archaeology to build this "tree of Life" for stars.  ( Amanda Smith | Institute of Astronomy )

In 1859, Charles Darwin published his path breaking theory "Origin of Species," which detailed that every life form on Earth shares a common ancestor.

The theory has opened numerous avenues in the field of evolutionary biology since then. Now, astronomers are applying the same theory to find out about the history of stars.

Dr. Paula Jofré from the Institute of Astronomy of University of Cambridge is drawing on Darwin's theory and is set to create a phylogenetic "tree of life," which will link a collection of stars with one another in the galaxy.

"Phylogenetic trees add an extra dimension to our endeavours which is why this approach is so special. The branches of the tree serve to inform us about the stars' shared history," says Jofré.

Researchers are lending principles from biology and archaeology to build this "tree of life" for stars. By studying of the chemical signatures of the stars in the galaxy, the astronomers are putting the tree together to see how stars are formed and how they are connected to each other.

The chemical signatures are akin to DNA sequences found in life forms on Earth. The team has selected 22 stars, which also include the Sun of our solar system. The chemical signature of these 22 stars has been cautiously measured by using data obtained from ground-based high-resolution spectra, captured by telescopes placed in northern Chile.

As soon as the data was analysed and families of the stars were identified by using their chemical DNA, researchers went on to study its evolution. The study was conducted based on the stars' ages and their kinematical properties, which was obtained from space mission Hipparcos.

Violent explosions occurring in the gas clouds, present in the galaxy produce stars. It is very much possible that two stars sharing similar chemical compositions may have been formed from the same gaseous molecular cloud.

Some stars survive the hardships of the universe and provide fossil records of the gas they were formed from. Among the stars evaluated at Institute of Astronomy, the oldest was estimated to have been formed about 10 billion years ago, while the youngest star in the group is 700 million years old.

Stars, like living organisms, share a history of ancestry as they carry with them the chemical structure of their origin I.e. the gas clouds from which they were formed. Astronomers can apply the same phylogenetic methods biologists use to map out the descent of plants and animals, to discover the "evolution" of stars.