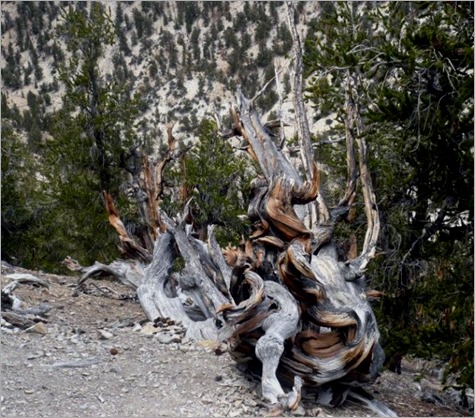 An international team led by researchers at Nagoya University, along with US and Swiss colleagues, has identified a new type of solar event and dated it to the year 5480 BC; they did this by measuring carbon-14 levels in tree rings, which reflect the effects of cosmic radiation on the atmosphere at the time. They have also proposed causes of this event, thereby extending knowledge of how the sun behaves.

When the activity of the sun changes, it has direct effects on the earth. For example, when the sun is relatively inactive, the amount of a type of carbon called carbon-14 increases in the earth's atmosphere. Because carbon in the air is absorbed by trees, carbon-14 levels in tree rings actually reflect solar activity and unusual solar events in the past. The team took advantage of such a phenomenon by analysing a specimen from a bristlecone pine tree, a species that can live for thousands of years, to look back deep into the history of the sun.

"We measured the 14C levels in the pine sample at three different laboratories in Japan, the US, and Switzerland, to ensure the reliability of our results," A. J. Timothy Jull of the University of Arizona says. "We found a change in 14C that was more abrupt than any found previously, except for cosmic ray events in AD 775 and AD 994, and our use of annual data rather than data for each decade allowed us to pinpoint exactly when this occurred."

The team attempted to develop an explanation for the anomalous solar activity data by comparing the features of the 14C change with those of other solar events known to have occurred over the last couple of millennia.

"Although this newly discovered event is more dramatic than others found to date, comparisons of the 14C data among them can help us to work out what happened to the sun at this time," Fusa Miyake of Nagoya University says. She adds, "We think that a change in the magnetic activity of the sun along with a series of strong solar bursts, or a very weak sun, may have caused the unusual tree ring data."

Although the poor understanding of the mechanisms behind unusual solar activity has hampered efforts to definitively explain the team's findings, they hope that additional studies, such as telescopic findings of flares given off by other sun-like stars, could lead to an accurate explanation.