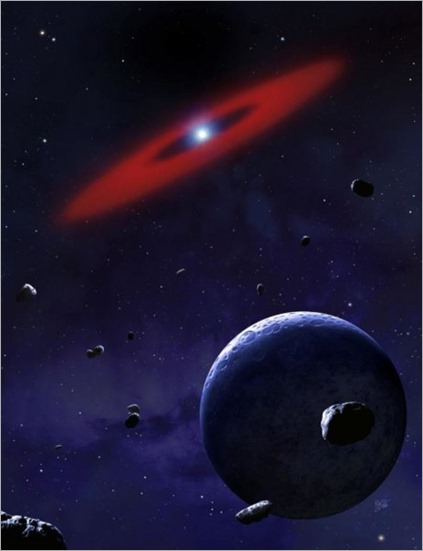 Many scientists believe the Earth was dry when it first formed, and that the building blocks for life on our planet -- carbon, nitrogen and water -- appeared only later as a result of collisions with other objects in our solar system that had those elements.

Today, a UCLA-led team of scientists reports that it has discovered the existence of a white dwarf star whose atmosphere is rich in carbon and nitrogen, as well as in oxygen and hydrogen, the components of water. The white dwarf is approximately 200 light years from Earth and is located in the constellation Boötes.

Benjamin Zuckerman, a co-author of the research and a UCLA professor of astronomy, said the study presents evidence that the planetary system associated with the white dwarf contains materials that are the basic building blocks for life. And although the study focused on this particular star -- known as WD 1425+540 -- the fact that its planetary system shares characteristics with our solar system strongly suggests that other planetary systems would also.

"The findings indicate that some of life's important preconditions are common in the universe," Zuckerman said.

The scientists report that a minor planet in the planetary system was orbiting around the white dwarf, and its trajectory was somehow altered, perhaps by the gravitational pull of a planet in the same system. That change caused the minor planet to travel very close to the white dwarf, where the star's strong gravitational field ripped the minor planet apart into gas and dust. Those remnants went into orbit around the white dwarf -- much like the rings around Saturn, Zuckerman said -- before eventually spiraling onto the star itself, bringing with them the building blocks for life.

The researchers think these events occurred relatively recently, perhaps in the past 100,000 years or so, said Edward Young, another co-author of the study and a UCLA professor of geochemistry and cosmochemistry. They estimate that approximately 30 percent of the minor planet's mass was water and other ices, and approximately 70 percent was rocky material.

The research suggests that the minor planet is the first of what are likely many such analogs to objects in our solar system's Kuiper belt. The Kuiper belt is an enormous cluster of small bodies like comets and minor planets located in the outer reaches of our solar system, beyond Neptune. Astronomers have long wondered whether other planetary systems have bodies with properties similar to those in the Kuiper belt, and the new study appears to confirm for the first time that one such body exists.

White dwarf stars are dense, burned-out remnants of normal stars. Their strong gravitational pull causes elements like carbon, oxygen and nitrogen to sink out of their atmospheres and into their interiors, where they cannot be detected by telescopes.

The research, published in the Astrophysical Journal Letters, describes how WD 1425+540 came to obtain carbon, nitrogen, oxygen and hydrogen. This is the first time a white dwarf with nitrogen has been discovered, and one of only a few known examples of white dwarfs that have been impacted by a rocky body that was rich in water ice.

"If there is water in Kuiper belt-like objects around other stars, as there now appears to be, then when rocky planets form they need not contain life's ingredients," said Siyi Xu, the study's lead author, a postdoctoral scholar at the European Southern Observatory in Germany who earned her doctorate at UCLA.

A rocky planet that forms relatively close to its star would likely be dry, Young said.

"We would like to know whether in other planetary systems Kuiper belts exist with large quantities of water that could be added to otherwise dry planets," he said. "Our research suggests this is likely."

According to Zuckerman, the study doesn't settle the question of whether life in the universe is common.

"First you need an Earth-like world in its size, mass and at the proper distance from a star like our sun," he said, adding that astronomers still haven't found a planet that matches those criteria.

The researchers observed WD 1425+540 with the Keck Telescope in 2008 and 2014, and with the Hubble Space Telescope in 2014. They analyzed the chemical composition of its atmosphere using an instrument called a spectrometer, which breaks light into wavelengths. Spectrometers can be tuned to the wavelengths at which scientists know a given element emits and absorbs light; scientists can then determine the element's presence by whether it emits or absorbs light of certain characteristic wavelengths. In the new study, the researchers saw the elements in the white dwarf's atmosphere because they absorbed some of the background light from the white dwarf.