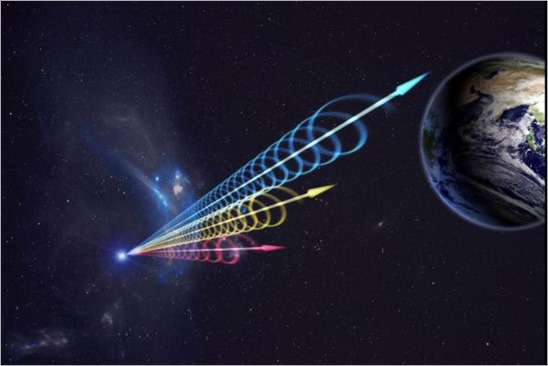 Since the first FRB was identified in 2007 from archival data collected by the Parkes radio dish in Australia in 2001, a total of 20 fast radio bursts have been identified. The bursts have been discovered by massive radio telescopes.

Only one has been traced to a place of origin, a faraway galaxy. Astronomers hypothesize FRBs are caused by mergers of relativistic objects. The dispersion of frequencies that make up the FRBs so far identified suggest they originate in faraway galaxies -- outside the Milky Way.

However, astronomers believe there's no reason why a fast radio burst couldn't occur within the boundaries of the Milky Way galaxy. If it did, researchers at Harvard University suggest, it would be powerful enough to be picked up by cell phones.

"The search for nearby fast radio bursts offers an opportunity for citizen scientists to help astronomers find and study one of the newest species in the galactic zoo," Avi Loeb of the Harvard-Smithsonian Center for Astrophysics, said in a news release.

The radio frequencies encompassing FRBs are similar to those used by broadband, cellular and other wireless networks. An array of smartphones running a special mobile application could operate as a massive radio observatory.

"An FRB in the Milky Way, essentially in our own back yard, would wash over the entire planet at once. If thousands of cell phones picked up a radio blip at nearly the same time, that would be a good sign that we've found a real event," added Dan Maoz, an astronomer from Tel Aviv University.