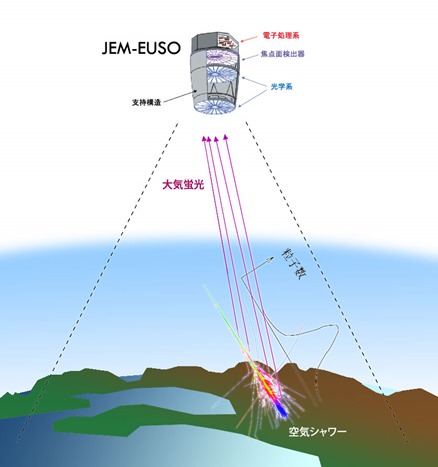 The NASA space agency confirmed Monday it would launch a long-duration, heavy-lift super pressure balloon (SPB) from the town of Wanaka for the third year running.

The launch, planned for late March or early April, would send the 532,000-cubic-meter SPB into what it described as "one of the most dynamic and severe flight regimes inside the Earth's atmosphere."

The balloon would ascend to an altitude of 33.5 km, where the stratospheric winds will propel it on a weeks-long journey around the Southern Hemisphere.

"With 32 days of flight in 2015 and 46 days in 2016, we hope to build on the successes and lessons learned of our past campaigns as we seek even longer duration flights at mid-latitudes," NASA balloon program office chief Debbie Fair brother said in a statement.

The balloon, which is as big as a sports stadium, would fly the University of Chicago's Extreme Universe Space Observatory (EUSO-SPB), a high-energy cosmic ray particle astrophysics payload.

The EUSO-SPB would test a fluorescence detector and supporting technologies in a precursor for a mission being planned to launch the EUSO telescope and install it on the International Space Station.

The balloon is made from polyethylene film, similar in appearance and thickness to the type used for sandwich bags, but stronger and more durable. 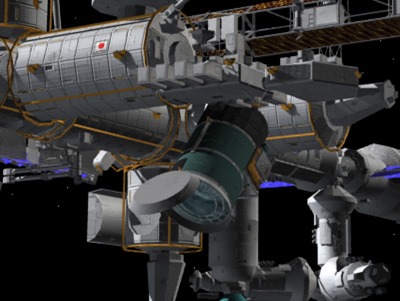 The SPB was designed to float at a constant density altitude despite the heating and cooling of the day-night cycle.

The current record for a NASA super pressure balloon flight was 54 days.

Wanaka Airport operations manager Ralph Fegan said Monday that NASA had committing to the site as one of its global launch bases for up to 10 years.

The agreement had paved the way for NASA to invest in a longer term base of operations and to create a dedicated balloon launch pad, Fegan said in a statement.

JEM-EUSO is a new type of observatory that uses the earth's atmosphere as a detector. JEM-EUSO will be on orbit on the International Space Station (ISS). It observes transient luminous phenomena taking place in the earth's atmosphere caused by particles coming from space. The sensor is a super wide-field telescope that detects extreme energy particles with energy above 3×1019 eV. This remote-sensing instrument orbits around the earth every 90 minutes on board of the International Space Station at the altitude of approximately 400km (Figure 1-1). The figure shows an extreme energy particle colliding with a nucleus in the earth's Atmosphere, where it produces an Extensive Air Shower (EAS), consisting of numerous electrons, positrons, and photons. JEM-EUSO captures the moving track, which is revealed by the fluorescent UV photons and reproduces the energy development of the EAS. 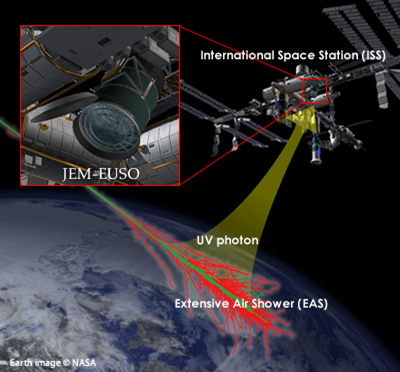 The JEM-EUSO telescope has a super-wide Field-of-View (±30°) with two double sided curved Fresnel lenses and records the track of an EAS with a time resolution of 2.5 microseconds and a spatial resolution of about 0.75 km (corresponding to 0.1 degrees). These time-segmented images allow the determination of the energies and directions of the primary particles. The focal surface of the JEM-EUSO telescope is formed by about 6,000 multi-anode photomultipliers. The number of pixels is about two hundred thousand.

JEM-EUSO instrument can reconstruct the incoming direction of the extreme energy particles with accuracy better than several degrees. It's observational aperture of the ground area is a circle with 250 km radius and its atmospheric volume above it with a 60-degree field-of-view is about 1 tera-ton or more. The target volume for upward neutrino events exceeds 10 tera-tons. The instantaneous aperture of JEM-EUSO is larger than the Pierre Auger Observatory by a factor of 50 - 250 when attached to ISS.

EUSO was originally selected by the European Space Agency (ESA) as a mission attached to the European Columbus module of the ISS. The phase-A study has been successfully completed in June 2004 under ESA. However, ESA postponed the start of phase-B, so Japanese and U.S. teams re-defined EUSO as a mission attached to the Japanese Experiment Module/ Exposure Facility (JEM/EF) of ISS. It was renamed as JEM-EUSO and started the preparation targeting the launch of 2013 in the framework of the second phase utilization of JEM/EF utilization.

JEM-EUSO reduces the threshold energy down to around 3×1019 eV and increases the effective area due to advances in technology and also the superior features of JEM/EF. The reduction in the threshold energy is realized by 1) new lens material and improved optical design, 2)detectors with higher quantum efficiency, 3) improved algorithm for the event trigger. The increase in effective area is realized by inclining the telescope from nadir which is named as tilted mode (figure1-3). In this tilted mode, the threshold energy gets higher since the mean distance to EAS and atmospheric absorption both increase. The first half of the mission lifetime is devoted to observe lower energy region in the nadir mode and second half of the mission to observe high energy region in the tilted mode. JEM-EUSO is planned to be attached to JEM/EF of ISS, which will be launched in FY 2016 by H2B rocket and conveyed by the HTV (H-II transfer Vehicle) to ISS.