The swirling belts and bands on Jupiter — along with the planet's raging storms — are some of the most fascinating features in our solar system. While storms like the Great Red Spot have been churning violently for over 150 years, the various zones in Jupiter's cloud tops move in different directions, powered by winds that can exceed 400 miles per hour (620 kilometres per hour).

A famous time-lapse video from the Voyager 1 flyby of Jupiter in 1979 showed us these roiling features and the intense dynamics of the giant planet's atmosphere. But now, a group of 91 amateur astronomers from around the world have combined their efforts to create a video that shows high resolution views of the motion of Jupiter's cloud belts, along with the rotation of the Great Red Spot.

But this was no spacecraft flyby. Incredibly, the images were taken from Earth, and are accelerated by a million times to show the planet's motions at high speed. 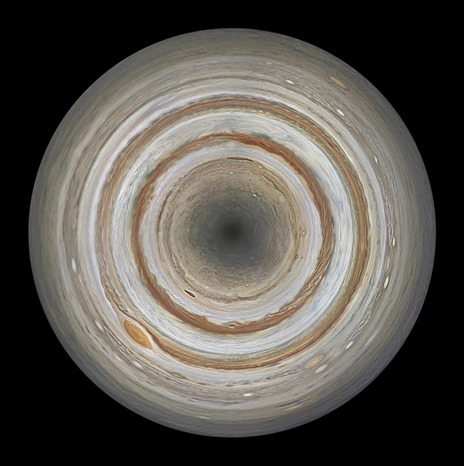 "More than a year ago I started a project involving 91 of the best amateur planetary photographers from around the world for a long-term, high-definition monitoring of Jupiter's cloud belts and the revolving Great Red Spot," said Peter Rosén, via email from Sweden, who organized the project. "This result took literally thousands of hours of work."

Rosén, and team members Christoffer Svenske and Johan Warell got permission from 91 planetary photographers from around the world use their images for this project. The team worked together to assemble images from their observations, then re-mapped them into cylindrical projections. Rosén said the images were colour corrected, stacked and seamlessly stitched together into a total of 54 complete maps and then re-mapped the images into cylindrical projections to make the imagery look like the planet itself.

"This shows the technical skills of the world-wide community of amateur planetary photographers to be able to reach this high level of details that can be tracked across the planet during 250 revolutions," Rosén told Seeker.

The light coloured bands on Jupiter are called zones, while the dark ones are called belts. In a belt, the winds flow in one direction. In a zone, the winds blow in the opposite direction. According to NASA, the cloud tops are higher in a belt, and lower in a zone.

The belts and zones of Jupiter are labelled in the picture below.

Rosén noted that Jupiter's moons don't appear in this animation because it was created from real pictures that focused on the planet itself. But also, the motion of the cloud belts has been accelerated almost one million times, meaning that "the moons would change position so radically between each frame that they would appear more like a swarm of fireflies and be visually very disturbing," he said.

Thanks to Peter Rosén and Astrophotographers around the world for providing this incredible view of Jupiter.